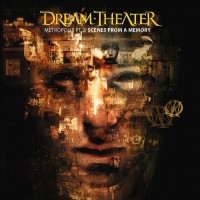 
Together with Images And Words this is the most important and beautiful Progressive Metal album ever made. It's my favourite Dream Theater album and one of my favourite albums of all time. It's a true classic.

Scenes From A Memory is meant to be the sequel to the song Metropolis Part I "The Miracle And The Sleeper", released 7 years before on Images And Words. According to the band, that Part I was just a joke: there wasn't any project about a second part and the band members had always called it just Metropolis since it was an instrumental. But the band wasn't allowed to record a long instrumental and John Petrucci added those strange lyrics. Once Metropolis became Metropolis Part I, the fans couldn't resign themselves: they wanted a Part II. So the band began to record some demos in 1996, together with Derek Sherinian. In the beginning, Metropolis Pt.2 was a 30 minutes song. In the end, the band decided to create a 77 minute concept album, featuring an intricate plot and familiar melodies taken from the first chapter.

Since this is a concept album, you will find a plot and some melodies recurring throughout the record. The concept is hard to explain: the plot unfolds both in the past and in the present (1928 and 1999). A young man, Nicholas, has a strange déjà vu and while sleeping, he hears desperate cries. He decides to travel to another home, but he still feels disturbed by unclear visions. He is the reincarnation of a girl called Victoria Page and murdered in 1928 by Edward Baynes (the Miracle). So he decides to go to a hypnotherapist to do a regression to learn more about his past life. As the story develops, it becomes more messy. Even the end (?) is thrilling...

I personally don't like the concept. First of all because I don't believe in reincarnation neither in life after death. Then, because it is not logically linked to the first Metropolis, it's too intricate and I find it is "banal". Nevertheless, it involves you in very well and, for this reason, I like it anyway.

The creation of Metropolis Pt.2: Scenes From A Memory has been deeply inspired by the movie Dead Again: after watching it, you might be able to clear your doubts about the plot. But remember that there might be a pair of audio mistakes which could lead you astray. If you have any particular doubt (even about a sound) you can send me a mail.

The music is just amazing: beautiful, difficult to play, moving and often perfect. "Often" and not "always" because some songs are too long: I'm talking about The Dance Of Eternity and the neverending instrumental parts in Home and Beyond This Life. I think these speedlight solos lack expression and melody. I don't like many keyboard solos and I'm not fond of Jordan Rudess' style: in my opinion he improvises too much in his lead parts and these parts seem not to fit in. But this is just my point of view. He is a genius and you might like him.

The thing I like best about this album is the perfect fusion of sounds. Every instrument can always be heard clearly but, if you are able to hear them all together, you will understand what I call "perfection": listen to Overture 1928, Strange Déjà Vu, and Finally Free.

There's a horrible noisy error in Fatal Tragedy at 0:36 and the long high-pitched singing of James in The Spirit Carries On is false (it is a short part copied and stuck back to back 3 or 4 times!). So even Dream Theater are not perfect. But Metropolis Pt.2: Scenes From A Memory is a masterpiece that EVERYONE interested in Prog music MUST BUY!
Written by The Silent Man | 29.09.2003