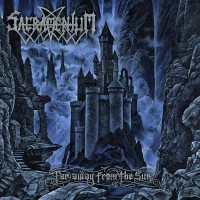 
With the Gothenburg metal scene in Sweden in full swing during the early 90's, bands such as Dissection, Unanimated, Necrophobic, Vinterland and Sacramentum suddenly emerged, creating a new form of black metal, melodic black metal, which inevitably became the darker and more sinister counterpart to melodic death metal. There's simply no denying Far Away From The Sun is one of those classic albums that played a huge role in the development of early melodic black metal.

I believe the album cover alone would be a perfect indication for what you would expect from this. For a start, look at the background colour: surprise, surprise it's black and blue. This colour scheme was the primary colour base behind so many classic black albums since the 90's. Just think about it: At The Heart Of Winter, De Mysteriis Dom Sathanas, In The Nightside Eclipse, Storm Of The Light's Bane, and Enter The Moonlight Gate, just to name a few, were all in some way legendary black metal albums, all released around a similar time, and all of which shared that very same colour scheme. This is no coincidence in my book though; they all specifically chose that same colour scheme because it was so damn effective, and was perfectly fitting for the music they created, and to be fair, bands still often use that scheme today. The blue and the black signal a grim, dark and bleak winter setting, and these bands would create soundscapes around those settings to intentionally send shivers down the listener's spine. And another thing before I move on, just look at that creepy castle at the cover's centre, eerie or what?

Now back to the important topic in hand. Simply put, Far Away From The Sun is a straight-up, no nonsense approach to melodic black metal. The riffs are relatively simple, but with their haunting, folkish melodies, they sure as hell are catchy. Some occasional synth work is also added to the mix, just to add that extra dark and sinister sound effect to the atmosphere, but it's the guitarwork that obviously drives much of this album forward.

So, undoubtedly this album sounds much within the same realm as Dissection's Storm Of The Light's Bane; the similarities in sound and style between Sacramentum and Dissection here are evidently clear. Some would even argue that Far Away From The Sun simply sounds like an album made of leftover material from Storm Of The Light's Bane sessions, which, if you're a big fan of Dissection, is not necessarily a bad thing. You may also notice a slightly raw-edged production and rawer-sounding guitar tone than that of Dissection.

Now, Sacramentum aren't exactly a full-blown copycat of Dissection; if you look close enough there are some slight differences between the two bands. One thing I've noticed is the lack of interludes and softer sections on this album. Take, for instance, the opening track "Fog's Kiss"; instead of featuring a slow intro that builds up the atmosphere for what's to come, they simply go straight in, heavy and brutal. "Fog's Kiss" starts with heavy riffing and blast beat drumming, but the heaviness doesn't simply stop there; the album simply flows with this same direction and tempo throughout, and with most tracks being relatively short, there is very little room for those softer melodic moments.
Looking at it this way, Dissection had more variety to their songwriting and more depth to their song structures, which then brings me back to why I described Sacramentum as having a straight-up, no-nonsense approach.

So, if you're a fan of the likes of Dissection and Necrophobic, or simply the melodic side of black metal in general, then I highly recommend you don't miss out Far Away From The Sun. It simply has all the ingredients needed for a melodic black metal classic: highly melodic fast-tempo riffing, evil poetic lyrics, sinister and harsh vocals, furious blast beat drumming, and grim wintery atmosphere.