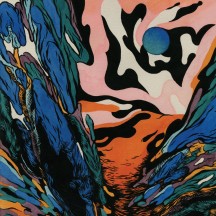 
Threshold is the fifth release by the unconventional grindcore trio from Michigan, Cloud Rat. Yes, that's right, Cloud Rat. Now don't be fooled by the band being named after a furry, fluffy little animal, because this band is far from soft. With Threshold they show us that grindcore needn't be all about pushing the limits of brutal madness, but rather about creating quality yet aggressive music on an album with a much shorter running time than a modern-day Iron Maiden song.

Now earlier I described this trio as unconventional. Well, what I really mean to say is that Cloud Rat aren't just your typical grindcore band: bringing forth a relentless barrage of repetitive breakneck riffs and furiously insane drumming beats, seemingly flowing in a set motion for the listener to headbang their way into a coma, with a songwriting pattern that can be described only as a rebellious hatred towards everything and everyone. Instead, this trio has taken a more refined approach, and they delve deeper into the emotional, and sometimes spiritual, aspects of things - like, for instance, their previous release, Pollinator, where the lyrical themes were in some ways more profound and meaningful, with their songwriting almost focusing on the spiritual aspects of things. Threshold isn't much different in that regard.

Threshold begins its formation in much the same aggressive manner as Pollinator, with their typical furious yet groovy riffing and slightly complex drumming taking centrestage, and that sheer aggressiveness and ferocity carry on through to the end. It also goes without saying that I've always been a sucker for Madison's harsh aggressive vocals, and here on Threshold her vocals are as powerful as ever, she manages to bring a unique and emotional rawness that recalls the old-school punk vibe and certainly plays a huge part in the overall performance of the band.

Now the structure isn't just plain and simple, especially when considering the fact that this is grindcore; it's typically jam-packed with irregular rhythmic patterns and tempo changes throughout, as is the case with most of their previous albums. However, where Threshold tends to differ most from Pollinator is in the production, where it seems as if the band has taken a backwards step, opting for a much rawer and edgier sound quality, much like the sound used on their earlier records. This would suggest a return to that slightly more blackened approach, notably used on their most critically acclaimed album, Moksha. And I have to say this worked very well for them in the past, and does so again here, as it gives off a much more aggressive and punchier sound and style.

Interestingly, despite nine of the fifteen tracks on here being under the two-minute mark, they manage to make every track sound different from one to the next, each with a different riff melody and structural approach. The riffs certainly come in abundance, containing no shortage of groove at all. The flow of the album seems to run so effortlessly, with every track smoothly coming together, whilst they never once lift their finger off the trigger in so allowing all that relentless aggressive energy to constantly burst through, and with the longest track, "Babahaz", being only three minutes in length, this album may fly through your eardrums like a speeding missile, but a memorable missile at that.

Now, my metalhead friends, go off and enjoy a bit of quality unconventional grindcore from a band conveniently named after a cute furry little animal; they may surprise you.