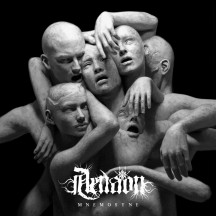 
We all know music evolves; it's inevitable that, as is the case with any form of extreme metal, when you look back through the years you will notice a significant change in what we metalheads call black metal. Some bands take that experimentation to a whole new level of boldness and obscurity, which is where we find Aenaon. On this fourth full-length installment, Mnemosyne, we see just what happens when progressive experimentation perfectly collides with black metal, and it's pure magic!

Now let's turn to a nation that has really helped contribute towards this extreme genre, most commonly by introducing us to its Hellenic black metal scene that sprang forth in the early '90s. That nation is Greece, with names like Rotting Christ, Varathron, and Acherontas first showing their mighty presence. The Hellenic scene has in turn become a style in which still remains relatively strong to this day, where the strong, hypnotic, mid-tempo, and highly melodic riffs are still clearly present, but then there's also those bands that dabble in the more obscure and experimental regions of black metal, with the band Necromantia most notable for doing so. But no band has ever really made such an unorthodox approach into black metal as Aenaon, who, consisting of several members from Hellenic bands such as Varathron and Katavasia, travel even deeper into the depths of peculiarities. Now let me explain how they do so.

As I mentioned, the band's style of approach is indeed peculiar. Here on Mnemosyne they provide such a unique level of capabilities, turning their attention towards a progressive and even sometimes avant-garde approach. I have to say the influences are way out there! I mean, there is even an element of '70s progressive rock with jazz fusion thrown into the mix, too, with some lead guitar work and instrumental interludes sounding almost as if they were directly influenced by King Crimson, of all bands. All of these seemingly crazy genre combinations are apparent whilst still they maintain much of their former Hellenic sound.

Aenaon simply shows us a masterclass in musicianship on Mnemosyne as these musicians once again abandon their Hellenic roots and create a unique, powerful, and progressive structure where they work with strong symphonic elements, alongside thunderous drumming and meaty guitar tones. The main riff patterns are highly melodic and with a high level of quality consistency, which remain present on each track. Saxophonist Orestis Zyrinis even provides a clear demonstration of how effectively a saxophone can really work in extreme metal, something we are becoming all too familiar with this year, but that intro to "Synastry Of Heartbeats" is simply mind-blowing. The two interludes, "Pleiades" and "Clark Nova", and the outro, "Doppelgänger", are also some fine pieces of masterful instrumentation that are by no means fillers, as they help immensely with the album's ambient build-up and flow. The vocals are very much worth taking note of as well, as Astrous provides not only efficient growls and shrieks, but also clean vocals, too - and mixed so effectively and conveniently as well, I might add.

Production-wise I have to say this is almost faultless; they create the perfect blend between the aggressive rawness of those distorted guitars and powerful harsh vocals and the clean, crisp sound of that beautiful saxophone, the acoustic passages, and the symphonics, so every element comes through so clearly, and yet in keeping with that traditional aggressive Hellenic sound.

We certainly have had no shortage of surprises this year, with bands such as White Ward and Kardashev showing us just how well black metal can be made into a progressive structure whilst going hand-to-hand with multiple genres, including jazz. So whether you like your black metal simply traditional, melodic, symphonic, or progressive, it really does not matter here, because Aenaon provides us with the whole package and then some.