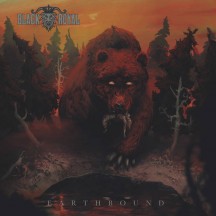 
Bound to the earth, Black Royal keep their ambitions grounded and steady, with respectable results.

Hailing from the lovely Tampere in Finland, Black Royal made some waves with 2020’s sophomore album Firebride, coming second in the year’s vote in the Sludge category of the Metal Storm Awards (as well as gaining well-earned exposure on alternative sources of metal reviews). Their sound was easiest to package into sludge, with its Southern dinginess and feisty grooves, but yet there was also some subtle expansion within their sound, with death metal aggression, stoner rockiness, and some elements of grandeur seeping into the mix (just remember the majestic closing dirge, “For The Dead Travel Fast”). Now coming close to three years after that record’s release, Black Royal are back with album number three Earthbound, a record that is mostly more of the same.

Once more, the central hub of the band’s sound resides in sludge; the opening title track is positively filthy in its verses, between the gnarly guitar tone and churning gutturals, but there’s also a clear taste for stomping Southern groove here. Still, the Finns acquired a reputation as having something of a non-rigid take on genres, and one cannot overlook the stoner and prog rock influences that can be frequently heard. The keyboards are a defining characteristic linked to the latter; the retro tone of the keys naturally draws comparisons to the 70s prog era, and there are brief softer moments woven into songs such as “Ghosts Of The Dead” and the almost Amorphis-esque opening to “Phoenix Ascending” that bring more from that sphere of music into the equation. Conversely, the likes of “Law Of Nature” and “13th Moon” have a desert rock vibe that makes the ‘sludge n’ roll’ genre tag sometimes applied to the band seem more applicable.

It is in some of these divergences that the album comes alive to me; much like the highlights for me on Firebride typically deviated a bit from the album’s norm, here it is that lighter touch of “Phoenix Ascending” and the more expansive nature of “Rite Of Passage” (subtle mellotron tones and all) that draw my attention. For quite a lot of the album otherwise, particularly in the latter half, there’s plenty of respectable fare for the genre that will make for fun nodding along to, but I’m feeling less drawn to Earthbound as a complete package than I did its predecessor. I can’t deny the sheer power of “Bear Cult”, and Black Royal have a clear recognition of good song flow and heft, but I’m not finding myself as fully taken with the album as I would perhaps like. Additionally, I think it’s fair to say that any presence of death metal in their sound is pretty much gone on this album, for better or worse.

Still, if you want more thick, tasty riffs and appreciate some extra prog flair added to it, you will find Earthbound to be very easily enjoyable. My reservations about it are less about the presence of any notable issues, and more the absence of moments that keep me truly engaged, and while those moments are what would keep me coming back to this album, I can’t say I’ve any qualms about the time that I have spent with this fiery bruiser.

Written on 19.10.2022 by
musclassia
Hey chief let's talk why not
More reviews by musclassia ››