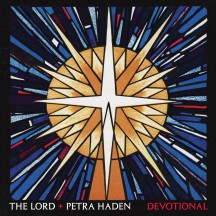 
Ever wanted a drone version of "The Great Gig In The Sky"?

The Lord is the project of Greg Anderson, who you might recognize as one half of Sunn O))), and also of some other projects including Goatsnake and a surprising amount of punk bands for someone whose music is on the opposite pace spectrum. Just like Sunn O))), The Lord is a drone project, but with enough of a twist that it differentiates the appeal from the overtly overbearing presence of darkness in Sunn O))). I first got to know The Lord because of the two collaborative songs it did with Big Brave's Robin Wattie and Alice In Chains's William DuVall. The more horror synth inspired debut, Forest Nocturne, was pretty cool but lacked some of the interest factor that the previous collaborative nature brought. Now we have a full on collab album.

This is not the first time that Greg and violonist/vocalist Petra Haden worked together, as she had guested strings on Goatsnake's I and Sunn O)))'s ØØ Void, while her resume also includes providing strings and/or vocals to Beck's "Loser", Green Day's Nimrod, and the Red Dead Redemption soundtrack. She does still provide violins for Devotional, those being a welcome presence and change of soundscape, but even Greg's guitars pale to how overbearing the presence of her vocals is. True to its title, there's a very religious feeling all throughout Devotional, its wordless vocalizations layered on top of one another and atop a droning riff, all for forty minutes of intense spiritual cleansing.

There's some obvious inspiration from Indian classical music, which I'm admittedly not very familiar with, but whose spiritual presentation matches the Devotional listening experience. That said, something about the guitars and the vocals feels like oil and water here, making Devotional feels like something a lot more awe inspiring in concept than in execution, and it isn't until the more sitar-driver "Yaman" that it feels like things finally gel. Both the vocals and the guitars are pretty dynamic even by drone standards, but they don't get together neither in structure nor in sound, making the intended immersion quite hard to achieve. Which is a bit of a shame, not only because the concept is cool as can be, but because taken separately, Petra and Greg's contributions (especially the former) could've yielded a pretty great release.

I'm not sure if this was a rushed job or if I'm just not in sync with Devotional, but I'll go meditate somewhere else.