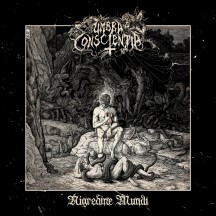 … out come sinister words sung in Spanish, despairing cover art reflecting our world (infested with hungry snakes), and monstrous riffs heralding fiery damnation. What isn't there to like?

Umbra Conscientia - the unlikely trio of a Costa Rican vocalist, a Costa Rican guitarist, and a German drummer - unleash with their second album a dissonant storm of the finest black metal fury. Unlike many black metal releases this year, Nigredine Mundi doesn't experiment with any new avant-garde elements, and one could blatantly argue that it doesn't offer anything new. After all, if you've listened to one second-wave black metal album, you've heard them all, in a way. There're all the characteristic features: the bleak, dark production, the chilling riffs, the raspy vocals, the Satanic lyrics.

However, while the fundamental ideas might not be original, the performance is exceptional for a new band. The haunting tremolo-picked riffs remind me of Burzum or Emperor in their heyday, while atmospheres dripping with occultism awaken images of Acherontas. The vocalist presents superb tortured wails and savage growls, his voice seemingly emanating from some deep abyss. The talented cover artist, Dávid Glomba, depicts blasphemous scenes in the album's booklet, the lyrics written in blood across biblical scriptures.

Fans of melody will find here no solace as Nigredine Mundi lets loose a suffocating wall of unrelenting noise. But, in comparison to their wild 2019 debut, the trio have learned to refine their sound, opting for darker moments of unnerving tension rather than constant reckless speed to keep you on the edge of your seat. While memorable riffs might at first be difficult to discern from the chaotic guitar-playing, multiple listens reveal exquisitely composed patterns within the maelstrom of sound. Fans of bands like Deathspell Omega and Arizmenda will surely enjoy this fine addition to their collection of crazed, destructive, yet majestic dissonance.

Written on 29.10.2022 by
F3ynman2000
Lift me above the clouds; crush me into dust. Voyage across the stars; journey into hellish depths. Fantasies and nightmares - all is possible in the realm of music.
More reviews by F3ynman2000 ››