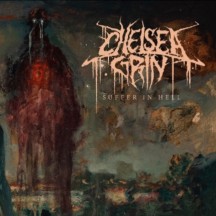 Part one of two, Suffer In Hell is the opening salvo of a double album that American deathcore dealers Chelsea Grin plan on unleashing upon the public (with the second half Suffer In Heaven due next March). Though the band have come a long way from their awkward beginnings, slowly clawing their way up from the pit they dug for themselves, Suffer In Hell is not the pinnacle of the journey, but hopefully a strong signpost of where the band intend to go.

Chelsea Grin manage to condense a surprising level of variation into the short runtime that Suffer In Hell has. The opener "Origin Of Sin" and "Flood Lungs" dip their toes into symphonic elements, while elsewhere, "Mourning Hymn" has an early The Black Dahlia Murder vibe, a strong foundation upon which to base a track.

Speaking of which, "Forever Bloom", featuring the late, great Trevor Strnad, is one of the stronger tracks; thankfully, Strnad's appearance wasn't wasted on filler. "Crystal Casket" is a chug-a-thon with a powerful drum performance by Viveros that will grab your attention whether you want it to or not.

Suffer In Hell balances all the dissonant components into one powerful and concise sound, with the aforementioned drums by Viveros providing the foundation blocks upon which the band build their sound. Barber's vocals are still powerful, yet balance between guttural and hoarse barks with apparent ease.

The weak links are Rutihauser and Flynn, who, while they are competent at what they do, offer little in the way of anything special or unique. "Deathbed Companion" is a good example of this; enjoyable as it is, there is little in the guitars or bass to make you sit up and pay attention.

Perhaps the main problem with Suffer In Hell is its branding; by the time "Suffer In Hell, Suffer In Heaven" draws to a close, the first question that is likely to be on your mind is, "is that it?" Twenty-five minutes long is more the length of an EP rather than album, with it feeling like the band split one album into two rather than making two albums' worth of material. Leave them wanting more is a well-versed adage, but is usually reserved for cases wherein you've given audiences a full serving of your offerings, not merely taking one complete item and cutting it into two. Rather than leaving me chomping at the bit for Suffer In Heaven, I'm left feeling like I'm awaiting DLC for a game that arbitrarily put half of the content for the original game behind a pay wall, rather than new additional content. If Chelsea Grin are taking pages out of EA's books, then I'll be getting off at the next stop.

Written on 21.11.2022 by
omne metallum
Just because I don't care doesn't mean I'm not listening.
More reviews by omne metallum ››