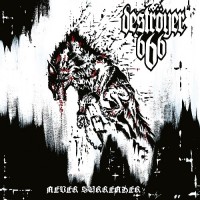 
Here is Never Surrender, the sixth release by the blackened thrash act Deströyer 666, which yet again provides us with more stellar headbanging material, with some of the catchiest riffs and tastiest guitar leads you'll hear this year. So Never Surrender seems a fitting album title, I say, as the beastly wolves certainly have no indication of surrendering their devastatingly ferocious bite just yet.

Deströyer 666 formed in Melbourne, Australia in 1994, and quickly rose to become one of the biggest, meanest, no-nonsense blackened thrash metal acts around, especially when their classic 1997 debut Unchain the Wolves is concerned. Their impressive form only continued, though, with their second release Phoenix Rising, where they once again showed us another solid all-round performance. Ever since then, they have done very little wrong by releasing another three stellar albums, with the last being the very impressive Wildfire in 2016. So it's been a lengthy seven-year wait for this 2022 album Never Surrender, which basically carries on from where their previous release left off. So is more of the same a bad thing? Well, not necessarily, and certainly not in this instance for me.

Aside from the poor lyrics, the songwriting and structure aren't that bad at all, it's standard and traditional for blackened thrash, meaning it contains a highly upbeat and aggressive tempo with the old 80s spirit and energy from the likes of Celtic Frost and Venom, and the vocals are raspy, shouty and aggressive, and also bring so much energy to the album. The guitar work is very impressive as usual, the tone holds such a meaty and powerful sound, the leads are tremendous, and the majority of the riffs are brilliantly performed, with every single track providing devastating riff melodies that can't help but keep you hooked. Although you may notice that a few riffs sound as though they were taken from several Megadeth records, so I would say Mustaine's guitar play had a major influence on this particular release, meaning there's nothing original about this release I will admit, but it may not matter if you're someone who really likes Mustaine's riff melodies, especially with a blackened touch to them.

The album begins with the title track "Never Surrender", which straight away unleashes a heavy melodic riff, with fantastic lead sections and a catchy chorus, however this is only the beginning, with the aggressive form continuing throughout the album. Each track provides something satisfying from the old blackened approach of "Pitch Black Night", to the more traditional heavy metal approach of "Mirror’s Edge" and "Grave Raiders", to the ferocious 80s sound of "Savage Rights", reminding us of early Kreator, to the seriously catchy riffing of the closing track "Batavia’s Graveyard". What's most important is how an album such as this flows, and this album certainly flows well, with a constant aggressive energy.

This is sure to be a highly enjoyable and delightful headbanging session for any metalhead, and definitely ideal for repeatable listening, if you're a fan of previous Deströyer 666 releases, be sure not to miss this one out.