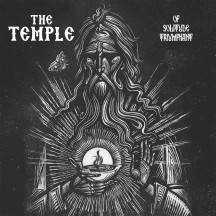 There's also a temple in Portugal, but I haven't visited that one much, so I have no idea what they worship over there. Still it's interesting to pin different bands of the same name one against another, especially in such a case like the three "The Temple" bands where there isn't a clear one that is more popular than the rest. Even if popularity would be the biggest factor, it would actually be the newest one out of the bunch, the New Zealand one, that would be the most popular, mostly due to their connection to Ulcerate. Still, this Greek temple was the first one to be "The Temple" on our database, being added earlier than both of the other ones, even if the Portuguese ones are the oldest. And, until literal minutes ago, they didn't have the extra "(GRE)" in their title, they were The Temple.

Still, there's more that's interesting about The Temple (GRE) than just the fact that they share that band name with other bands. They've been around for more than 15 years, dropping a demo as far back as 2007, with an EP in 2015, a full album in 2016, and a split in 2017. Sadly, they dropped a second full length instead of going the jack-of-all-trades route instead of also dropping a compilation and a live album. That said, it was 2016's Forevermourn that brought them to my attention, as it was a pretty cool epic doom metal cut, however it wasn't really one that left much of a lasting impact, but it was enough to get me to check up its follow-up, Of Solitude Triumphant.

And the one thing that really sets apart Of Solitude Triumphant for me is its liturgical allure. Starting out with a mass as an intro, something about that ecclesiastical tone never leaves the album. I mean, it's a band literally called "The Temple" with an album cover stylized as an Orthodox Christian saint, so it's not a surprise, but it is surprising how well the music, and especially the choirs, work to meld that somber atmosphere with doom's sorrowful dirges. "Epic" might be too big of a sell, but there's definitely a grandiosity in the way the band approaches the mystical. The whole album is a bit of a one-trick pony in that regard, leaving little surprises to be had along the full listen, but it's a trick that The Temple (GRE) do pretty well.

It is somewhat fitting that I'm reviewing this a couple of days close to the second biggest Christian holiday. Something to contrast the festive mood that the holidays usually give us.

Written on 23.12.2022 by
RaduP
Doesn't matter that much to me if you agree with me, as long as you checked the album out.
More reviews by RaduP ››