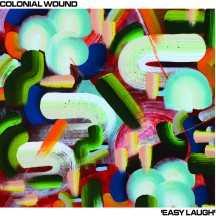 It's not very often that my head gets turned by a hardcore/noise rock band on its first full length release. I mean, it has happened before, on the strength of the band's EPs up to that point. But what really got me about Colonial Wound was how direct the band name was and how somehow nobody thought to name their band "Colonial Wound" up to now. This is the kind of band name you would've expected to find on some obscure hardcore band in the 80s already. Sure, I got to know the band because of their advertised connections to Kylesa (just because your drummer toured with Kylesa once that's barely a reason to namedrop them, and yet here I am doing it anyways), even if more relevant for our discussion is the band's connections to post/sludge act Yashira.

Colonial Wound sit at a pretty interesting genre intersection, having quite some in common with the aforementioned Yashira. More and more it becomes apparent how sludge metal is a connecting bridge between metal and hardcore, with a lot of noise rock bands being very hard to differentiate from sludge metal acts, with the heaviness and noisy atmosphere being a common ground despite not being conventionally metal. There is a lot that is metal about Colonial Wound, with its bass-heavy sense of melody despite noise feeling like a staple in a lot of post-metal or blackened sludge that still sits comfortably on the metal side of the spectrum. The harsh and desperate hardcore vocals are becoming more and more commonplace in this side of metal too, so Colonial Wound's placement as a metal band is not hard to accept.

And yet, there's a lot of it that screams punk. The mathcore itches that it scratches. The "don't have to question where they stand politically" aspect of the band's name, song titles, and lyrics. The bursts of metalcore riffing. The brevity of it all. Easy Laugh is an album that wastes no time and is poignant both lyrically and musically, and it is that latter that hits the most, with how melody and chaos blend, and how a weirdly subdued sense of heaviness works in tandem with the all-out vocals. Colonial Wound pack a lot of contrasts and interwoven sections in a short time, ensuring that impact is felt. It's nice to have an album in this niche that isn't trying to be the heaviest and noisiest thing out there, or the moodiest and most despair inducing thing out there. The balance of ideas really works for them here.

Still, not sure why they think it'd be easy to laugh at this record, didn't really work out for me.

Written on 23.12.2022 by
RaduP
Doesn't matter that much to me if you agree with me, as long as you checked the album out.
More reviews by RaduP ››