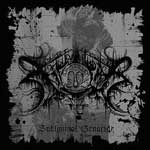 
01. Disharmonic Convergence
02. Prison Of Mirrors
03. Beauty Is Only Razor Deep
04. Trauma Will Always Linger
05. Pyramid Of Skulls
06. Arcane And Misanthropic Projection
07. Victim Of Your Dreams
08. Through A Trance of Dispondency
09. Loss And Inner Distortion
10. Subliminal Genocide
11. Malice Hidden In Surrealism


Xasthur is the quintessence of suicide, a woeful lament in the midst of nowhere as you lose yourself deeper and deeper in the fields of solitude and everlasting oblivion, forgotten, forlorn; dying. Malefic managed to use once again his blades and from the blood pouring, painting scarlet the pale skin, another wish for death was cast upon humanity. "Subliminal Genocide" is the title of his new crimson diamond, through Hydra Head Records this time, and i personally consider it the best release of this magnificent US black metal band so far, it's everything Xasthur have always been and in the most representative way, presenting the ominous and oppressive visions of Malefic in such an utterly expressive way.

First of all, something that is easily noticeable by those who know how Xasthur sound like is the fact that the production is slightly better this time, it's pretty obvious that Malefic managed to offer a better production and by saying that don't expect crystal clear sound, the overall feeling is still misty and blurry, it's just that this time things have become a little bit more... "shiny". Is it something positive or negative? Definitely positive, the ideas are more recognisable and since the sound of the band hasn't lost its personal and blurry aesthetic we're talking about a stronger attempt in terms of sound. Also, there are times Xasthur tend to sound quite upbeat if i may say (like on the title-track) when the time comes to compare the speed they get at times on "Subliminal Genocide" with the overall low-to-mid tempo legacy of the band.

The sound of the guitars can be compared only to the sound of razors harrasing your skin, tormenting the tranquility of your existence. The razorblade riffing and the guitar melodies with the echo FX sound so distresssing, so bitter, so filled with anguish and pain that you can't take them out of your mind, they're always present deep inside, like the poisoned with sorrow blood longing to be set free. Of course the echoded acoustic guitar chords couldn't be missing and they add a sense of death-like calmness in the overall dreadful soundscape. The guitars consist half of Xasthur's atmosphere, it's the first side of the two-fold desolate beauty this band has to offer, the other one being the unearthly and painful howls that show their grandeur for one more time in the most appropriate way. Malefic spits curses here and there with bitter disgust, humiliating humanity for all the suffering, chanting death's ominous lullaby in such a unique, threatening and mourning manner. The keyboard melodies are present to show that "beauty is only razor deep", i guess Malefic managed to present the role of the keyboards with this song title in the most appropriate way since their offering is beautiful yet so wailing and melancholic that crafts in such an unerring way its sinister art on the skin of the listener. The production might have become "better", yet the problem with the pressence of the rhythm section is still vivid, but since it never had such an important role in the sound of Xasthur it's not a problem really; it lurks in the very background of the atmosphere, lending its menacing vibes "through a trance of despondency".

"Subliminal Genocide" opens with an intro and then three of the most fabulous spells ever cast by the band, the triarchy of desolation itself, "The Prison Of Mirrors", "Beauty Is Razor Deep" and "Trauma Will Always Linger" unleash all the suffering and all the mourning in the overburdened atmosphere, to name but a few of the strongest moments of the album. But i couldn't skip mentioning "Loss And Tuner Distortion" and "Through A Trance Of Despondency" which are two instrumental monuments of morbid beauty, "Arcane And Misanthropic Projection" for its exceptionally terryfying screams, "Victim Of Your Dreams" for being the dissonant opus it is and the more up-tempo and dynamic title-track.

Xasthur consist of one of the most renowned bands in the underground black metal scene, so... if you're searching for the ultimate Xasthur manifestation along with a supreme suicidal black metal release then "Subliminal Genocide" must become part of your collection. As for me, it simply is one of the best 2006 releases, personally speaking.

Written on 29.09.2006 by
KwonVerge
"It is myself I have never met, whose face is pasted on the underside of my mind."
More reviews by KwonVerge ››