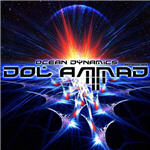 
Oh my god how can I redact this review; an album like this doesn't come as often as one would like…or not like or whatever…this is so weird and so different that even holds my nerves to write this review, I'll keep it short, honest and objective.

Dol Ammad consists in an entire football team (almost 20 dudes) managed by one smart brain called Thanasis Lightbridge, imagine where his ego is floating right now, I mean he's the only one with a white jacket in the entire band photo and he added the word "Light" in his pseudonym. All jokes aside, he actually appears to be a very good musician, an excellent musician to be honest, he has complete knowledge of orchestration, electronic music, opera, instrumentation and god knows what else.

The music presented in this record can only be described as ambient music, yes it has a lot of metal elements, mostly guitar riffs and drum patterns, it has also a lot of opera features such as long choirs, sopranos, altos and tenors; so as you can see this is a very odd mix, but in the end the core and overall structures of the music fell into electronics and ambience, intense and speedy ambience, but ambience none the less.

This album would have sounded amazingly well in any battle of that Peter Jackson's film Lord Of The Rings; the whole record comes wrapped in mysticism and eeriness, the first four songs are attached to each other under the concept called "Thalassa Dominion", I can't talk much about the lyrics or the imagery as I didn't receive the retail copy to review, but as far as I could see it seems like a very interesting thing.

This album is quite hard to rate, it has effects of dolphins and seagulls singing if you know what I mean; technically this is a great masterpiece, but I seriously doubt many people will easily digest this experience, it becomes so artsy and pretentious that many people will prefer to push the stop button and toss an easier album to enjoy.