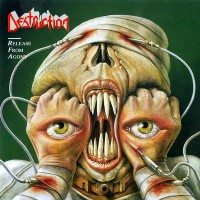 
When I put this CD into my stereo I had to increase some volume, because the quality of the record wasn't similar to new CD's. Despite that I like the sounds of this album: You can hear the drums and guitars, but there is also a bass on the background. Singing is well-know Destruction's style and quality. When you look at the back cover you could get the image that you would be holding a CD of some glam rock band, but fortunately the front cover draws you back to the reality.

Destructions 5th record Release From Agony starts with guitar into song named "Beyond Reality". After a calm and melodic start we can concentrate to listen some thrash. Release From Agony starts with angry and fast thrash riffing and drumming. When Mr. Schmier starts his angry vocals it makes you wonder how good this record is going to be. Release From Agony delivers one of the best thrash songs for the people who like or can stand the Schmiers vocals, which aren't maybe the best you could get.
Dissatisfied Existence continues the thrash symphony, but is able to surprise listener with chorus which is the songs name yelled by the band. Traditional thrash riffing with good singing, thumbs up. Solo is complicated but fits to the song good.
"Sign Of Fear" starts calmly with acoustic guitars. After the intro heavy riffs start and keep the song rolling the song towards the end. You could say this a good song to calm down a bit among these fast thrash songs, unfortunately some may think its too long. 6 and half minutes long quite slow-tempo song at the end would may have been better than in the middle of the record, but this wasn't a bad choice either. Good song, maybe too long, maybe not.
"Unconscious" ruins starts fast and continues with the tempo to the heavier bridge before solo. Solos is one of the best on this album. After the solo there is also a slower and heavier part. These tempo changes give a good change between fast and straightforward riffs. Only thing keeps bothering me is the chorus. I just don't like that chorus is the name of the song yelled thousand times.
"Incriminated" is another fast song on the album. Unfortunately it just isn't enough. "Incriminated" is fast song, but still it's quite "quiet". There just isn't enough hooks or anything special to remember.
Next song "Our Oppression" delivers a fast song with a same script used on the other songs, but still it is a lot better than Incriminated or "Unconscious Ruins", until the chorus. On this song I just couldn't stand the same "yell the song name"- script anymore. Otherwise this a really good song, fast thrash.
Last song of the record, "Survive Or Die", continues the script with the choruses, but successes with the other parts better. Good song to end a thrash album.

After line-up changes Destruction tried to change their style and did it quite successfully, although I personally didn't like the choruses yelled of certain songs. Sign Of Fear was really good slower song among quite fast thrashing songs.
Overally a good thrash record by Destruction. There is just this feeling that most of the songs are made by using the same script. Especially on choruses you can hear it.
Written by ExE | 17.02.2004