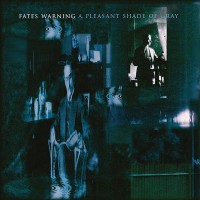 
Well, when someone is speaking of progressive rock, usually, you could think of Dream Theater or Symphony X. But, no, for sure, there are many other bands in this field that deserve a high degree of attention. And one of these bands is, certainly, Fates Warning. This band could be considered as one of the founders of progressive metal in the late 80s.

Mentioning progressive style, Fates Warning belongs to this genre. But it's a heavier side, without being power ("American power" as in their beginnings) or something else (I'm speaking here of their "classic" progressive period). It's heavier than Dream Theater, and it doesn't have anything in common with Symphony X's style. Somehow, this album reminds me also of Mekong Delta, "Pictures of an Exhibition".

"A Pleasant Shade of Grey" is presented as a whole, parted in 12 songs. Or, if you want, it's a "concept" album. FW explores a darker side of progressive. Well, the main feeling of this album is the "grey-ness". Reading the lyrics, you could be intrigued by the statement: why it's "pleasant"? And what about this "shade of grey"? The "opposition of the contraries" is solved, in the end of the record. Emptiness, confusion, desolation, which lead to a sort of desperation. But, finally, "face to face we'll awake/ to see another day". It's like a nightmare, which finally ends. Moreover, this sensation is clarified by the clock ring in the end of the album. Like the beginning of "Awake" album (Dream Theater).

Ray Adler, on vocals, carries out a great task; he owns a versatile voice, very enjoyable. But, nonetheless, I was amazed by the guitar work done with inspiration by Jim Matheos, which has a particular way of playing his guitar. As a "historical" note, I must mention his last 3 performings in 2003: Gordian Knot ("Emergent"), John Arch ("Twist of Fate"), also a former member of FW, and OSI (self - titled album).His guitar is very expressive, covering a wide range of sounds, but mostly, heavy riffs. I also like the distorted sound this band managed to get. Not to mention here a whole set of solos.
The keyboard/piano is played by Kevin Moore (Chroma Key, former Dream Theater).
In 1998, Fates Warning released a double live album, entitled "Still Life". On the first part, the band performed live the whole "Pleasant Shade of Grey" set. The live show worked perfect. Definitely, a worthy live album.

Sometimes I wonder why this band is so underrated. It is really a shame. And everybody who likes this genre should check this band out. The album I'm talking about could be a very good introduction to this interesting band.
Some people criticize progressive genre for obvious reasons: lack of innovations, platitude, same old themes presented as new, uninspired lyrics, forced paradoxes. Well, Fates Warning has always had the ability to create interesting music, by avoiding recurrent clichés. And another important remark: if they were copying, they imitated themselves.