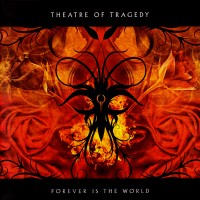 
Theatre Of Tragedy is a truly good band. I am not just saying this because I respect their work a lot but also because they have had a versatile career and they seem to have been remaining faithful to their ideas no matter what may be said about them.
My expectations concerning the new album Forever Is The World were high ever since I heard the samples and, gladly enough, the album did prove to be a strong one.

The musical evolution of the band has resulted in melodic and poetic albums that belong to the absolute classic treasury of gothic music as well as both darker and lighter electronic dance music, professionally mastered and performed even though controversial for many. The previous release Storm could be considered as a possible return to the gothic style from the industrial side and Forever Is The World has now confirmed it.

The opening track for the album is also one of the best songs on it. "Hide And Seek" displays the key elements of the band's style, the piano, the dark atmosphere and the play between the rough male vocals and clear female singing. It is extremely positive to hear Raymond using his Aegis-era vocals again instead of the somewhat obnoxious nasal technique he discovered on Musique and Assembly. The crew made a good decision by taking Nell Sigland as a replacement for Liv Kristine. Although Nell's voice is a bit colder and sharper, her timbre and style are, nevertheless, similar to Liv Kristine's. Forever Is The World is generally well composed and Nell sings very well. Her not-lyrical singing suits the music perfectly. Any kind of operatic or similar singing in the new album's case would be straining too much.

The instrumental field of the album is strong as I already said in the previous passage. It is wonderful that the piano has returned, the warm, mild and water-colour-like piano passages have always adorned the band's music and made it so special. There are some bleak guitar riffs typical to gothic style and, on the other hand, the synthesizer has a larger role than on the old albums which bore a more acoustic touch. The best, lengthiest and also the core track of the album, "Hollow" possesses all the best characteristics of both the band's average work and of the album. When I was listening to this I had a similar impression as when listening to Fields Of The Nephilim. Besides "Hollow" the best songs that represent this album are "Transition" and "Deadland" among others.

This album is a nice treat and surprise for all fans of Theatre Of Tragedy and for everyone who appreciate some good gothic music. This time the beloved band of the genre has paved a way towards a traditional, yet bit more contemporary way of interpreting the style. And of course, the band does all of it in their own special way of creating music.