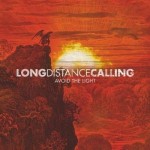 
Two years only after the release of their beginning album Satellite Bay, the German Post Rock-Metalers of Long Distance Calling are back with a new release, Avoid The Light. The less that we can say is that if this band was promising, their new release confirms that their first album was not done with some hazardous chance. Obviously this band knows how to do cool peaceful music and the fans of Isis or Cult Of Luna who still don't know the combo will have to discover Long Distance Calling asap.

One important point that you have to know at first is that Long Distance Calling plays instrumental music. Don't expect any vocals except on the track "The Nearing Grave" which features the really good Jonas Renkse of Katatonia (we will talk about it later). Other than that, the music is "Post" if you see what I mean. This is dark and a bit mellow but really addictive too with really good melodies and songs which all become stronger and stronger progressively from the beginning to the end. Everything work pretty well and despite the fact that we don't have any vocalist, we're never bored. On a side maybe that Avoid The Light is not especially innovative or even surprising if you already know the previous album of the band but what I can say here is that they confirm that they are able to do good music. After all a lot of people talk about bands like Pelican and many other ones, it would be a mistake to forget this promising good band now.

Now that the band is signed on an important label, I think that it will be easier for the band to find an audience and we can already see an improvement on the production since that we even have a performance of the busy Jonas Renske. The interesting point here is that we have the proof that the music of Long Distance Calling also works with a singer. Check this song, this is one of the strong point of the album.

Satellite Bay was a good first step, Avoid The Light scores the goal! This release is for the fans of Post Rock-Metal at first but remains accessible to a large open minded audience too. You just have to like good music, good peaceful melodies and you'll enjoy a lot this release. No doubt that Long Distance Calling will find new fans with this new album. I'm one of them.