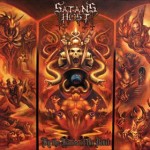 
Satan's Host began as a respectable blasphemous heavy metal outfit. Then they broke up. Then they reformed, blasted the world away with their Satanic-themed blackened death metal onslaught, then set out to release By The Hands Of The Devil.

Harry Conklin of Jag Panzer fame is back manning the mic, and his piercing clean vocals dominate the album. The instrumentation is typical of a heavy metal album, but Patrick Evil apparently forgot his pick at home and had to use one of Abbath's, and the Evil Hobbit was dreaming of Inferno before the recording process, making for a blatantly black metal influenced heavy metal opus.

These guys make it obvious how comfortable they are with their instruments, ripping through an hour's worth of energetic magnificence with ease. P. Evil and Conklin don't shy away from letting their audience know they have the chemistry of true metal veterans, as made apparent by their songwriting prowess. Songs ebb and flow without missing a beat, the band in sync from the word go. They don't try to reinvent the wheel. They don't introduce any foreign concepts.

Perhaps the best part about this release, sticking with Conklin's vocal abilities, is how far and apart the band members set themselves from Jag Panzer. You know with Christian Älvestam you're going to get, for the most part, a Scar Symmetry clone. While that might please a lot of his fans, Conklin just sticks to what works with this album, for the sake of the band. And that - unfortunately for Panzer fans - includes not sounding like a Jag Panzer clone (although fans of the band will undoubtedly find similarities within each track).

Of course there are drawbacks to an album that mixes the "why so serious" of black metal and the "rock out with your cock out" of heavy metal. The styles obviously clash, even with Conklin's voice doing everything in its power to unite them. The Satanic lyrics are more cheesy than anything Glen Benton's managed to conjure up thus far in his career, and the repetition leaves you wondering why they made an entire album of songs that sound so similar.

That being said, By The Hands Of The Devil is an easy recommendation for fans of Mercyful Fate/King Diamond, mixing classic heavy metal and polished black metal about as good as you'd expect anybody to be able to.