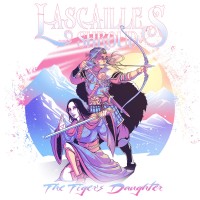 Concept album based on the book ''The Tiger's Daughter" by K. Arsenault Rivera