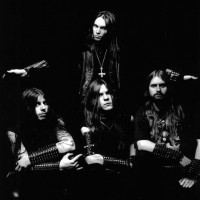 Swedish heavy metal musician Jon Nödtveidt, 31, was found dead on Wednesday, August 16 at his apartment in Hässelby, a suburb of Stockholm. He shot himself in the head and was surrounded by lit candles, Expressen reports. Shortly before the ritual suicide, he had sent farewell letters to his father and his girlfriend and explained to a friend, "I'm going away for a long, long time. I'm going to Transylvania."

Sometime between Monday (Aug. 14) and Wednesday, Nödveidt, vocalist and guitarist in the popular Swedish black metal band Dissection, chose to take his own life.

At 7:21 p.m. CET on Wednesday, a police patrol reported to the police communication center in Stockholm that a man had been found dead, the apparent victim of a self-inflicted gunshot wound. According to several of Expressen's sources, the singer had placed an open copy of "The Satanic Bible" in front of him before pulling the trigger.

"He shot himself in the head and lay dead in a ring of lit candles," says a police source.

At 5:44 p.m. on Wednesday, the police received a 911 call from Jon Nödtveidt's family who hadn't been able to establish contact with him for a couple of days.

"They were very concerned," says his legal representative and manager, Per Nordqvist. "His girlfriend and his family called after their fears that something terrible had happened had been bolstered."

The reason for their concern was a farewell letter that Jon Nödveidt had sent to his girlfriend in Germany. His father, Anders Nödtveidt, had also received a postcard asking him to contact a number of people and thank them for everything.

"What it said is personal. I want to keep it to myself," Jon's father says of the postcard's contents.

"I met him in Stockholm just a week and a half ago. Everything seemed great then. I've always had good contact with Jon during his upbringing and throughout his adult life. I don't understand what has happened to make things turn out this way. This weighs even more heavily on us considering everything that has happened. This is very difficult for the entire family."

Jon Nödveidt's father likes the photo in which his son wears a black leather jacket and has asked for that picture to be published.

"It's a good photo. Jon thought so as well," says Anders Nödtveidt.

The suicide is believed to have been planned for a long time.

"At the scene there was also a will and a suicide note," a police source tells Expressen.

In December 1997, Jon Nödveidt was arrested for the murder of Josef Ben Meddaour and served seven years for accessory to murder and possession of an illegal firearm. The highly publicized murder in Gothenburg is depicted in the movie "Keillers Park". What has come to be known as "the Satanic murder" in Sweden has led to both a movie and a book.

"Keillers Park", which is named after the park in Gothenburg where the murder took place, opened in theaters in Sweden in March 2006.

"Josef Ben Meddaour was a naive and open person with a big heart," says Edwards. "He was a victim of a grotesque act of homophobia."

The murder was also the basis for last year's "No Tears For Queers", a book about hate crimes by Swedish journalist and author Johan Hilton.

In 1997, at the time of the murder, Jon Nödtveidt explained that he lived in a world where Satan was God and that they drank blood and sacrificed animals. On Dissection's web site he revealed that he was a member of MLO — Misanthropic Luciferian Order.

On September 22, 2004, two weeks after his release from prison, Jon Nödveidt talked to Expressen about the murder and his time in prison.

"I want to put the murder behind me and move forward," he told the newspaper. "It feels like I'm a new person after my time in prison. The time before the incarceration feels like another life. I've been through so much since. I've become more mature, older and look at life and death in a totally new way."

When asked about the crimes he was convicted of, Nödtveidt said, "No matter how you twist and turn it, it can't be undone. What happened happened and I must move forward with my life. I have taken responsibility for my actions by having served my time in prison. I'm not proud of the fact that I have to watch my mother cry, but I'm working with new strength and look ahead."

When asked if he regrets what happened, Nödtveidt said, "Out of respect to the victim's family, I don't want to discuss what happened. The only thing I want to say is that I'm not proud of it."

Josef Ben Meddaour was a 37-year-old Algerian homosexual man who was killed by a shotgun blast to the head and the back.

"I'm absolutely not a racist," Jon Nödtveidt told the newspaper. "There's nothing that makes me more sad and upset than people who say things like that. These are people who know nothing about me. Everyone who knows me knows that I have friends, brothers and sisters from all over the world."

"Jon was an open person who enjoyed life," explains his manager, Per Nordqvist, to Expressen. "He was easy to get along with and very accomodating. Still, what happened happened and that is something you always carry with you one way or another. All people have baggage."

Per Nordqvist tells Aftonbladet that the suicide of his friend has left him feeling totally empty and that it's terribly saddening.

"I've spent the last few years collecting the rights to his music," Nordqvist tells Aftonbladet. "Jon felt that he was losing everything during the time he was incarcerated."

"I met him as late as Monday (Aug. 14) when he was here for a short meeting," Hargeby tells Expressen. "I am shocked and dismayed."