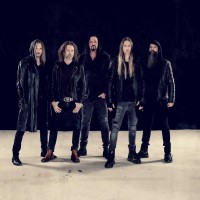 The 'Recharging Europe Tour' of the Swedish progressive metallers from Evergrey should have started in a few weeks. Due to the still uncertain event situation, the complete tour has been postponed to 2022. The rescheduled trek features a couple of additional shows as well as new support acts, Fractal Universe and Virtual Symmetry.

"Given the nature of the current world situation it is simply not feasible to go on tour in Europe and UK", the band says with regrets. "It involves too much insecurities and risk, and too much money for too many people. With that said we are confident enough to say that by this time next year we will be ready and firing on all cylinders. Aaaaaand we will also have released another album! So TWO albums in ONE tour! Not too shabby huh?!"