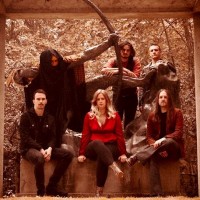 Toulouse based heavy fuzz-laden doomers Deathbell announce the release of their second full length instalment, titled A Nocturnal Crossing. The five-piece also present an album's first official single, "The Stronghold And The Archer". A Nocturnal Crossing album is due out February via Svart Records.

Written and recorded between 2018 and 2021 in the French Pyrenees, A Nocturnal Crossing's lyrics reflect on the metaphysical forces of life and spiritual introspection. Recorded live in April 2021, Deathbell have summoned a demon of Occult Rock to rival the classic greats of Coven and Pentagram and modern legends such as Jex Thoth and The Devil’s Blood. For inner journeys alone, or live group ritual worship, Deathbell's A Nocturnal Crossing works as a gateway or ticket into a wider initiation of Doom Rock’s inherent ancient power of black magic.