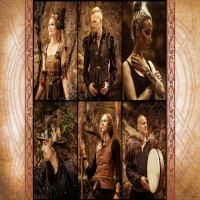 Faun about the origins of the new song: "It started with our percussionist Rüdiger Maul composing this great rhythm and sending it to his band members. At the same time Oliver read in these books that it is likely that the allfather of the Nordic mythology "Odin" was active as a shaman. For example in the "Lokasenna" of the "Edda" he is accused of having performed female magic, so called "SEIDR".

"We will publish our new album in a 100-page book, in German and English language, in which we will also print the texts of great authors, to give the reader / listener the possibility to dive deeper into the myths behind our songs. But if you already want to delve into the matter now or are still looking for a Christmas present, we want to recommend these great authors and books to you. (Unfortunately, as far as we know, only some of the books of Wolf-Dieter Storl are available in an English translation)."