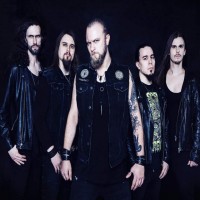 Extreme folk/melodic death metal bringers from Finland, Brymir, unveil details and first single in connection with the release of their upcoming fifth studio record. Dubbed Voices In The Sky, it will be released by Napalm Records on August 26th. Produced by the band's vocalist Viktor Gullichsen at JKB Studios, with mastering helmed by Tony Lindgren at Fascination Street Studios. To taste a first piece of the new outing, give a listen to the song "Fly With Me".

Viktor Gullichsen on the album and first single: "Even in the darkest times of despair, the songs and sounds we cherish can help us light our way through the night. For us, writing the album Voices In The Sky served this purpose during the past trying years. It let us imagine how it would feel to be back on the road, touring alongside our friends and our idols. As performing live is one of our driving forces, we eventually began to feel powerless without being able to do it.

"This is especially apparent in the lyrics for the title track. It is a song about ambition forged in frustration and longing. About a desire for the validation an artist so often needs to fuel the endless pursuit of expression and accomplishment - especially the kind of validation we only can find in club full of roaring metalheads, reacting to our music. Even many other songs tell of travel, discovery and conquest. I wonder why..."