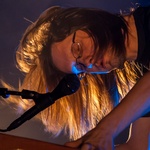 In the times of the on-going non-existence of Porcupine Tree, one has to wonder if the band will be coming back at all in the near future. Especially if you take into account how Steven Wilson is faring as a solo artist. He's just released his third album that has sold really well. He's got a stable live band going for a while now. More impressive, though, is the fact that 2/3 of his recent European tour has simply been sold out. That is impressive. And doesn't it make you think that instead of dying for another Porcupine Tree concert, his solo gig might actually be worth checking out? 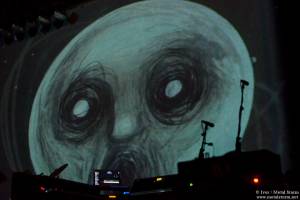 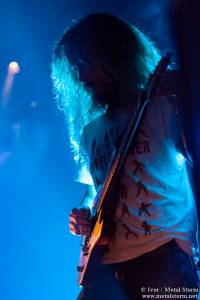 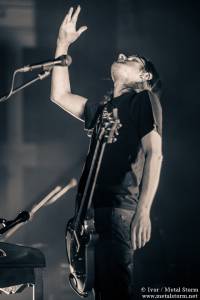 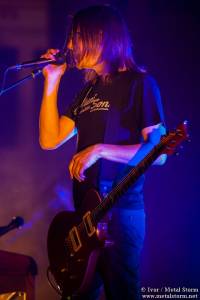 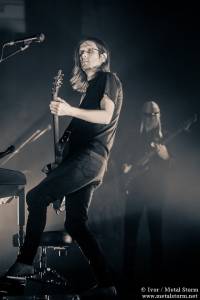 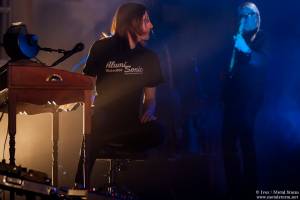 So, my last leg of the this edition of Progventure saw us taking a drive from Belgium to the German capital, Berlin, picking up a hitch-hiker along the way who, as it turned out, knew a thing or two about the music for which we were on a trip. Cheers man, wherever you are! Our Berlin hotel was overlooking the venue, Huxley's Neue Welt, located in the southern part of Berlin in what seemed like a curious neighbourhood. Honestly, it's been a while since I last saw that many casinos and arcades on one street, even the street side of the venue complex was full of those little slot arcades.

When I was booking tickets, one of the unpleasant surprises was the fact that it was a seated concert. I understand that Wilson's music takes a long-winded approach but to have a seated gig is a bit of stretch, if you ask me. A venue that could have easily fit at least twice as many people, was filled with about a thousand seats, if my estimate is correct. True, it leaves substantial breathing space but at the same time somewhat lacks in the proper rock concert elbow feeling department which might turn out to be a crucial factor in getting a good live experience for both the audience and the band.

Those of you who have the right equipment (for the record - I don't), have probably noticed that Steven Wilson pays careful attention to releasing his works in surround sound. It came as a bit of a surprise, though, that the same careful attention is also given to the shows. So, the sound is rendered through a quadrophonic set-up: two main arrays in the front, and two at the back of the audience. The very least you get from a set-up like this is a far more even sound distribution across the venue and the sensation that the music is all around you, not only coming from the stage. Not to mention all the intricacies of the little details happening in every corner at the quieter moments. 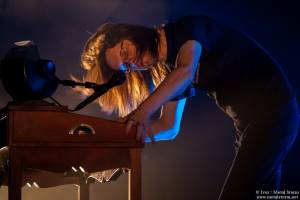 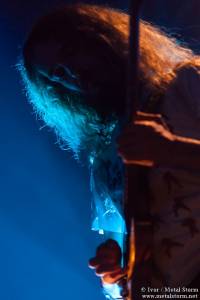 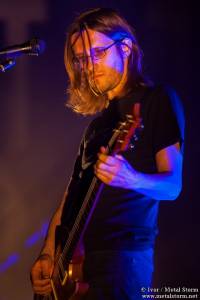 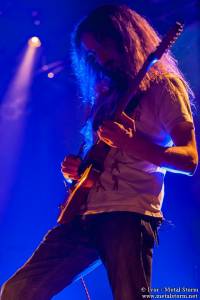 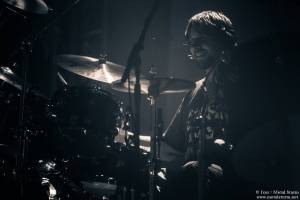 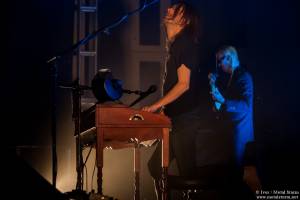 The album opener, "Luminol," is a very impressive track with which to start the gig. Sharp drums, fat bass-line, and keys lead the way for Wilson's barefoot stage entrance and proceed with complex twists of prog, varying the pace and mood, already showcasing, in a non-flashy way, what talented musicians have gathered around Wilson. This single lengthy song can be interpreted as a sort of annotation to what was yet to come as far as the musical spectrum is considered. And damn, if it all sounded so good already at this stage of the show, what was yet in store?

As the gig entered the second song, I got a momentary impression that the new album would be played in its entirety in its running order. But that feeling passed soon enough. I mean, I wouldn't have minded it. The Raven That Refused To Sing (And Other Stories) is a great record and hearing a good album played in full, is always an interesting experience. But, I gather, it makes a bit more sense to open with the first and close with the last track of the album.

However, a couple of songs after the opener it started to look like the gig would be a bit on the mellow and eclectic side, which was making me somewhat uneasy. Until I heard the first notes of "The Holy Drinker," that is. This song's got some serious character and a life of it's own. It's powerful to say the least. And entering into "Deform To Form A Star," it clicked together, the general outline of the gig presented itself. It was to ebb and flow with moments of storm in between, violence among the deceiving calmness. 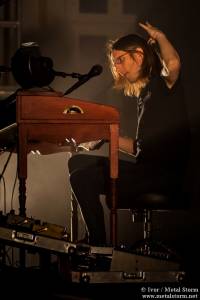 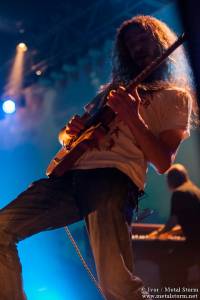 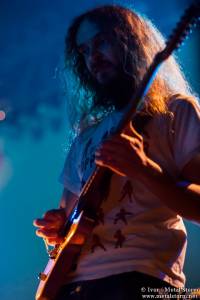 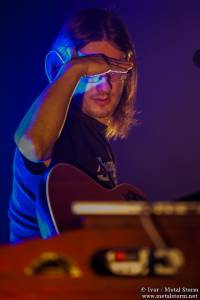 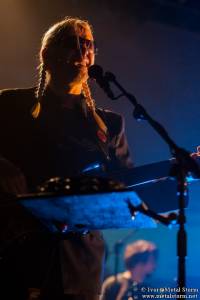 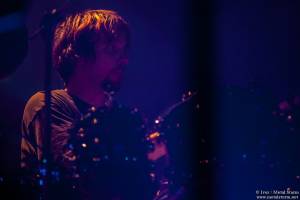 While there's not particularly much going on on stage show-wise, there are mostly two characters that will be capturing your attention besides Wilson. It's granted that this man will be living in his music giving it his all, twisting and turning. One of the two I have in mind is the bass player Nick Beggs, sporting blond plaits and playing some awesome lines with much ease. The other one is the drummer Marco Minnemann. This man is bonkers behind his set. I really mean that. I've seen footage of him playing, but a live performance was still a surprise. He is precise, passionate, and so expressive in his playing it's a show on its own; he's a joy to watch.

Before "Harmony Korine" Wilson invited everybody to stand up because of the upcoming rocking tunes, as he referred to them. To be fair, people would have gladly been standing far before that, there were quite enough heavier songs preceding that moment. But once invited to stand, they all remained standing up until the very end. Not even the very quiet start of "Raider II" made them take their seats. That beginning of the song is also spectacular in the sense that for some moments an absolute quiet among the audience is achieved. It became so quiet, you could practically hear people breathe across the whole hall; a change of posture would make you feel like a herd of running elephants. Rarely have I seen this quiet accomplished and it underlined a huge feeling of respect towards the band. 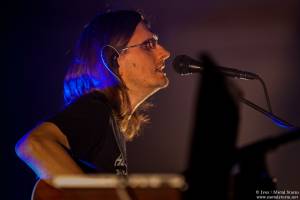 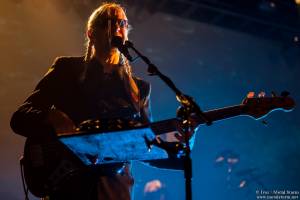 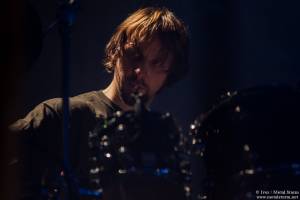 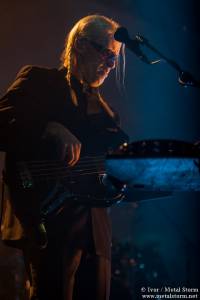 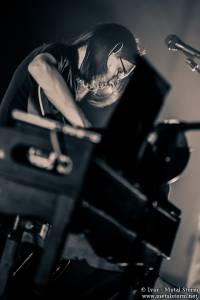 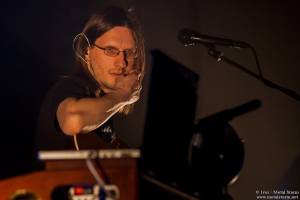 The biggest surprise for me came at the encore, though. As Wilson said, his solo career is not a long one and it might be lacking in what might be considered an encore anthem. So, he dug deeper in his career, and came up with some early Porcupine Tree material that was technically also his solo work. Let's say that going to this gig I was not prepared to hear "Radioactive Toy" live. And that, ladies and gentlemen, got most of the crowd singing along. That was a really spectacular end to the evening.

There's likely quite a bit I've forgotten to mention about the gig, from atmosphere to stunning visual backdrop movies, from musicians to twists and turns of the music. Even about three weeks later I still have a lot of various thoughts about it in a particularly non-coherent order. The experience to take away from one of his gigs is spectacular musically, visually, and emotionally. In short, this was a superb concert.

More from the same trip in Progventure Part 6 and Part 7.