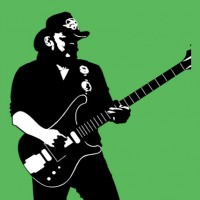 It has been said before, but Lemmy was the last of a line of rock star hedonists; however, he was so much more. He was well-read, enjoyed his own company perhaps more than anyone else's, and was unapologetically apolitical and irreligious. I don't know if he ever read any J.S. Mill, but he was the living embodiment of the classical liberal credo: "I can do what I like as long as it doesn't harm anyone else". As such, he was never accused of treating anyone badly; rather, he was often caricatured as an English gent, always ready and willing to talk to fans and frequently going beyond the call of duty to help out friends and other musicians.

But, he was also a complicated man. He rarely talked in detail about his childhood, but it was clear he resented his estranged father who left the family when he was young. He would frequently clown around with any interviewer toiling to get to know the real man underneath the 'Lemmy' legend, and he was a natural jester. In fact, Lemmy came across as an intensely private man; he had many friends but none seemed to know him deeply and he was completely at ease with this private side of his nature. "If you don't mind being a loner, it's a great gift," he said in 2003. "So many people can't stand to be on their own. Silence worries people. And they can't read to alleviate it. If the TV breaks down, they're fucked - the world goes away from them."

Even though he enjoyed playing along with the legend, he was also frustrated that his music wasn't taken seriously by the mainstream music press. It's perhaps hard to believe now, given Motörhead's status as an iconic rock band: the bridge between metal and punk. However, in the 70s, 80s and much of the 90s, its music was labelled noisy, sexist and ultimately pointless. "It means you never get decent reviews of your music," Lemmy said in a 1983 interview, "you get reviews about your bullet belt or how loud it was or what the crowd looks like or how ugly you were or didn't have a shave that day, but you very rarely get someone taking your music apart and looking at it whereas they love to analyse stuff that I think is vastly inferior because it has the right haircut."

He was right to challenge the orthodoxy of the music press. Down the years, both with Hawkwind and Motörhead, he played a major part in creating some of the most memorable rock music of his generation. Watching the many interviews he did down the years, it is hard not to get the impression that he thought he and his band deserved more respect, and he had a point. Few artists recorded classic albums like Overkill, Ace Of Spades, Bastards, and Inferno over four decades and few - if any - had such a great influence on modern heavy music, especially metal, thrash and punk. This was one of the Lemmy's many contradictions: Motörhead played the same fast-paced, relentless rock and roll for over 38 years. He craved respect without wanting to compromise, expecting critics to fall into line, and by the end, they mostly did.

Many people claim to not care what others think of them, but in reality this quality is a rarity. It's amazing how many interviewers, given the opportunity to sit down with a man responsible for some of the greatest music of the last 40 years, chose to focus on his hedonistic lifestyle. Lemmy snorted speed and drank copious volumes of Jack Daniel's whiskey throughout his life, but this was how he wanted to live his life: expecting nothing from anyone else and genuinely appearing to not give a flying fuck about what others thought about him. He dismissed claims that he was a bad influence on his fans, saying in 1988: "You really want to be like me? Jesus. Be an accountant - they've got all my money."

It's hard to think of another musician that bled rock and roll in the same way Lemmy did. Motörhead used to tour 9 months every year, but when not on the road, he was to be found in his favourite bar, 'The Rainbow Bar and Grill' on the Sunset Strip. According to Scott Ian of Anthrax, Lemmy used to collect his mail from this popular haunt of rock and roll illuminati, past and present. Fans were regularly seen here, posing for selfies and having parts of their bodies autographed by Lemmy, who was often to be found drinking a Jack and Coke and playing the slot machine. And this was exactly how he wanted it. He liked to be close to his fans. Not for reassuring attention, but because he was one of them. As he said himself: "I'm not a star - I don't have a limo waiting outside. I'm emotionally closer to the fans. I'm a fan too - we're more or less the same people."

Rock and roll glitterati, like Metallica and Dave Grohl attended his funeral in 2015, but Motörhead fans also made an appearance. Lemmy was close to his admirers, regularly invited them backstage to have a drink and considered them friends. And this is how we will remember him. A true rock star, but not raised on a pedestal: tangible, humble and on the same level as the people who idolised him the most.

"So you see, the only proof
Of what you are is in the way you hear the truth
Don’t be scared, live to win
Although they’re always gonna tell you it’s a sin
In the end, you’re on your own
And there is no one who can stop you being alone"

RIP to the Lem and Motörhead, sorely missed.