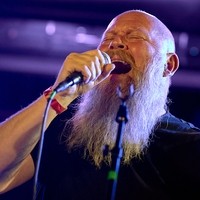 Back in February I got an opportunity to go to Stockholm for three weeks on short notice. As Swedes were very liberal with their pandemic restrictions, I started looking for concerts I could attend. I found five! Once there, however, not a single one of them happened. Among those postponed shows was the Green Carnation acoustic tour that I was so eager to see and eventually was lucky to attend in Helsinki about half a year later. 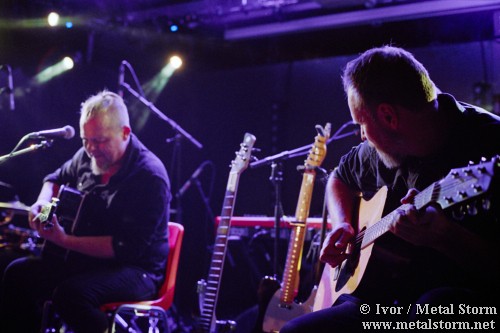 Green Carnation have gifted me the single most unique concert experience of my life. Their reunion and the restaging of the show under the Åseral dam in 2014 is simply an unforgettable event. Not to mention that it's also unrepeatable nowadays as–if satellite imagery is to be believed–the whole area under the dam has been flooded. I laid high expectations on this reunion and expected the band to rise to new heights in subsequent years. However, with one live DVD and EP out, and with shows now and again, things have been progressing somewhat slowly, I must admit. At least from a hungry fan's perspective.

Then again, pandemic happened. This acoustic tour was supposed to be for the 15th anniversary of their The Acoustic Verses album last year, but it got postponed for obvious reasons. Thankfully it did happen in spite of these uncertain times. There have, however, been some changes in the band since I last saw them, with some members going, returning, and leaving and new ones being inducted. I'm glad that for this tour and a bit Michael Krumins is back and I also welcome Trond Breen on guitar as their newest addition. This, however, also means that, for this tour at least, Green Carnation have become one of those curious phenomena that's left without a founding member. Makes you think how an entity with its legacy has grown bigger than its constituent parts.

Acoustic Green Carnation is a highly emotional experience. Their music on the whole is very demanding, but it gains further layers of intimacy when stripped down. Naked honesty laid bare to witness. I can see how this tour was meant to work in a sitting environment with a culmination at the Kristiansand's Kilden theatre. Helsinki's Ääniwalli is a misfit in a way, though, supposedly being the only standing gig of the tour. One can argue both ways about it and I'd love to also experience this show sitting down but have absolutely no regrets and find no faults with being able to move around and step that little bit closer. Intimacy, after all, means bridging the distance, physical and emotional. 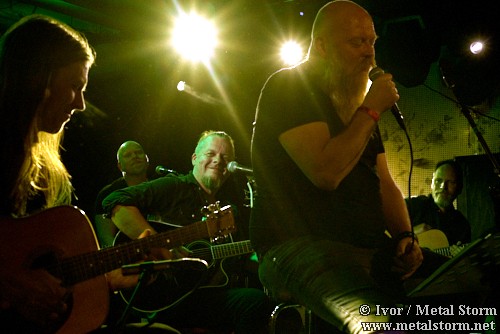 In a way it was surprising to me that the show was very cosy. That despite being located in a repurposed old industrial building that's about as cosy as only a block of concrete knows how to be. That despite people talking here and there around the room. That despite clinking and smashing bottles thrown into collecting cans. The relatively sparse audience was there for the band after all. 17 years has been a long waiting period for a revisit for Finns. People were singing along, cheering along, and, when it mattered, listened intently in utter silence.

The set list consisted primarily of The Acoustic Verses album with a couple notable additions. There was the newly released cover of the Jim Croce song "Time in a Bottle." There was Michael's guitar piece "Stardust" from his upcoming solo album. There was the acoustic rearrangement of "Lullaby in Winter." But most notably there was the surprising cover song of the evening, the one which was promised to be different every time. For Helsinki it was the absolutely fabulous "Nights in White Satin" by The Moody Blues. So surprising it was that Kenneth didn't even know that they were playing it at that particular moment, or at all.

It's kind of hard to choose how the songs sounded more emotional, whether performed alone as Stein did with "The Burden is Mine... Alone" and Michael with his "Stardust" instrumental, or performed as a full band like any of the rest of the songs. I've got to say this, though, that for once I absolutely loved the crowd singing along. "The Burden..." was hair-raising and heart-wrenching, and "Nights..." was just phenomenal with singing coming from the stage in front, and from people left, right, and back. That was a totally immersive uniting experience. 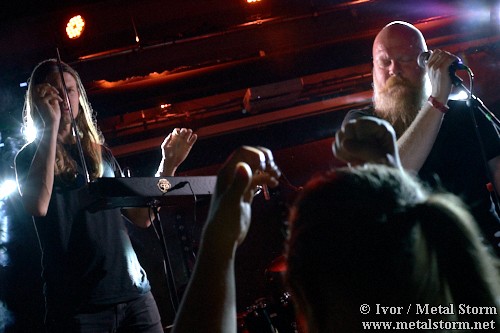 I wasn't expecting anything spectacular show-wise. Green Carnation aren't that kind of band, especially acoustically, though of course they can be to some extent. They were emotional, beautiful, and absolutely honest, befitting the material. I want to say they didn't surprise me but that Moodies cover was out of the blue. They once again reminded me their true value. When they perform they touch the soul and reach the heart with their songs. They show what beautiful emotions are like. And that's a good reminder, a sublime feeling to have leaving the venue into the night.

As an afterword I'll say I was debating whether to call this small trip to Helsinki a Progventure. I haven't done that before on account it being basically in the back yard, closer than some cities within Estonia, albeit requiring an overnight stay. However, at present times any trip abroad feels like a venture. So there's that. And we did get to meet some guys from the band later on and have some beers and a chat. I figure that counts. Cheers, friends, it was nice seeing and hearing you again.