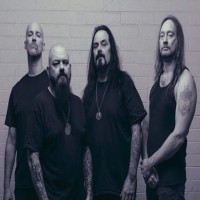 We first wanted to do a phone interview, our system kind of failed so I had to rearrange the work a little bit to finally present 8 written questions to a metal monster called Steve Asheim. The final product is quite good and even relaxed…so here it is; enjoy!!

-Hello I'm Francisco Eguiza from Metal Storm. To begin with I want to thank you for allowing me to do this short Interview, and of course for giving your fans a chance of reading a little more about Deicide, so thank you very much. I have limited space so i'll just start the shooting.


-First let me go back to the old days, you are an original member of the band, your early albums became cult and are now worshiped by many metal fanatics and bands; but I really want to know what "Deicide" and "Legion" mean to you now and meant for you then; in those days did you see yourself achieving everything that you have accomplished up until now?

Steve: I personally take everything year by year. The 1st record I was still amazed we had a record deal. For legion, I was too busy worrying about how we were going to get a second album out to really think about what it meant, i was just trying to stay in the music business and stay brutal.

I love what I do; it means more to me than just about anything. So that was always my main focus, even now, year by year, I'm just trying to stay in business. But when you have a chance to look back 15 years and say "wow, that shit is pretty good, it still holds up". That's because real metal never dies. Some people call those albums classics, I say I'm glad to be doing this as long as I have, and to be considered by some to be classic is an honor, it's icing on the cake.


-There was actually a little lump in your trajectory, when Deicide released in 2001 the album "In Torment In Hell" many people (both press and fans) responded in a bad way towards this album, then you even switched labels and some other things happened. What do you think it happened back then? And how was the band's reaction about this issue?

Steve: I think that whole period was brought on by being burnt out, but not on music or the business, just burnt out on each other. I kind of always thought we were being kept down by our record company and stuff like that, but after we did "in torment" and were finished with our deal and moved on to a great deal with earache, we were still not up to 100%, by then it was obvious to me that it wasn't the record companies fault, it was us, we were sick of each other, well basically the Hoffmans and Glen were totally sick of and hated each other, and the quality of the bands work and the fans suffered for it.


-You are about to release a new album; I've heard the EP already and the structures sound darker and more complex than usual. What can everyone expect from the new full-length "The Stench Of Redemption"?

Steve: Well, the 666EP is a great taste of what's to come. Basically it will be more of the same. Epic yet accessible, complex yet catchy, fast yet rhythmic, even a slower part or two. All in all I think it's our best work, it's certainly the work I'm most proud of.


-You also released your first DVD recently, was it a good experience? Or was it really annoying to have cameras shooting your rehearsals and asking you annoying questions…like this one actually?

Steve: some people get all rockstarry and act like everything, like shooting vids and doing press is a big fucking hassle. I say, bring it on. It beats the alternative...like scrubbing toilets or being a bum. Doing the DVD was great fun so I don't know what some people's problems are. I actually can't wait to do another one, which there are definite plans for. 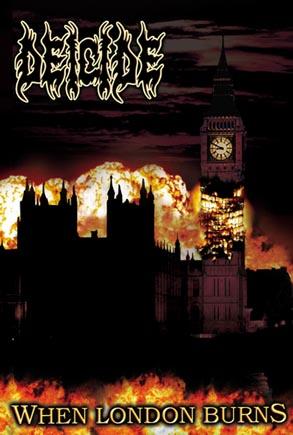 -Your music has been really controversial since Deicide was created, how do you see this fact; is it a great free publicity campaign made by purists-hypocrites secretly worshipping Satan? Or is this affecting your works and tours and you hate them just for being alive?

Steve: i say the more controversy, the better; it's what attracts peoples' attention. But if that's all you have to offer, you're gonna have a pretty short ride. You've got to back up your bullshit w/ substance. And hey, we've been around almost 20 years, we must be doing something right.


-Now to other things. You, along Glen Benton, gave birth to one of the most respected bands ever in death metal history. In those really old days what influenced you to form a metal band and to write and play music as you did, what was the main trigger that pushed you to do those things?

Steve: what pushed me towards extreme drum playing was all the lame ass pussy drum playing that was going on in the 80's. All the so-called metal really made me pissed that it was even being called metal. But in the 80's was also the birth of true metal, Metallica, Slayer, Dark Angel, Destruction, Sodom. I wanted to capture all the heaviest moments from those bands and just play like that.

Those guys are all masters and laid the ground work for what was to come.


-Years and years have passed since the creation of Deicide. You've released many albums since 1987; please tell me which album is the one you love the most, the one making you say "Damn I'm really so fucking proud of you, my little musical son!"

Steve: I'd have to say "stench" is definitely my favorite and the one I'm most proud of, glen too I think. It really all came together on this one, the material, the players, the sound, the vibe... It was a real pleasure doing this record w/ this line-up, almost effortless. But from the past, I'd have to say the last time we felt this good about a record was "once upon the cross", because of the blend of material and sound, but listening back, "cross" seems very slow. Live we play those songs much faster. Actually we've always played them faster than they are on the record. When we went in the studio in 94' and i recorded the drum tracks at the speed i had been playing them at practice, we only had 22 minutes with the same amount of songs, they were just faster. 22 minutes does not an album make so I re-recorded the songs at a more controlled pace and still only ended up with 30 minutes. So there it was.


-To end the interview. Since you are Steve Asheim, one of the monsters of metal to many people, please tell everyone what metal really means to you.

Steve: Man, I've been living metal my whole life practically. I got my 1st album "kiss-dressed to kill" when I was like 7 years old. I got my 1st drum kit when I was 12 and the 1st song I played was iron maiden's "the prisoner" horns up to Clive burr! I got my 1st double bass kit when i was 16 and immediately started playing Lombardo, Hoglan and Ulrich. And a year or 2 later when my own band was formed and we started playing around Tampa and meeting all the other local bands... death, morbid angel, obituary, it was like "fuckin'a, let's do this"! So to me, metal is all I know how to be, not just something to listen to. Without metal, i might as well call it a day! 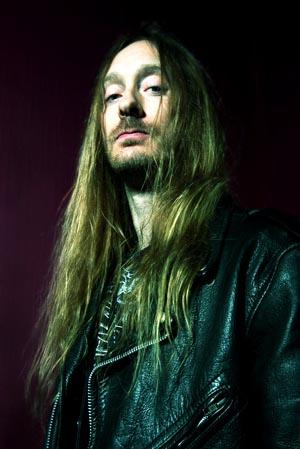 -Thank you very much for your time Steve; thanks for answering my weird questions and hope to see you on tour soon (don't forget about Mexico).

Steve: Thanks bro. One place we definitely won't forget about is Mexico, we love playing down there, the fans are loyal and true and we always have a blast. See everybody down there real soon!