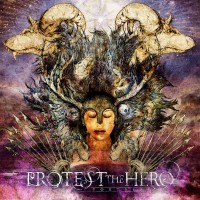 
Protest The Hero has a love/hate thing going on... either you like it, or I hate you. Honestly folks, this is one of the best albums I've ever heard. I was a musical virgin going in, and a technicality slut coming out. This is a must hear album.

The album starts off with the killer track, "Bloodmeat". That song alone sold me on this album; it has the technicality of the guitars and the drums, and the melody coming out of Rody Walker. The album is a complete blitzkrieg to the ears; everything is fast and in your face. The guitar is just simply wonderful, ranging from those heavy chugging breakdown riffs to some of the best solos on the planet. And the bass is even better. Bass in most ensembles is supposed to maintain the groove of the songs and follow along.

Not in Protest The Hero.

The bass is in its own little world, played incredibly fast and technical. It's definitely a highlight on this album. The drums are also great throughout the album; they create different beats, giving the songs a little more variation.

The best part of this album is the musical god known as Rody Walker. I would give up a lot to have the voice that he has - it's melodic and he can certainly scream. It has a certain uniqueness that is unmatched by anyone I have ever heard. During the song "Bloodmeat", at about the three-minute mark, my jaw dropped. I have never heard something so beautiful.

This album is the cat's meow. Literally. During the song "Wretch", you can hear a cat meow. Now I don't know whose cat got into the studio, but it's a nice added effect! The only thing I don't like is the "8-bit" effect that you occasionally hear in some of the tracks.

This is a great album, and is at the top of my list of recommendations. Buy now!