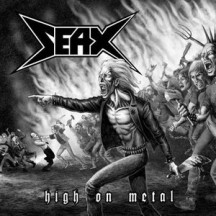 
If there's one new album I really want to send to bands like White Wizzard, this is it. High On Metal is a heavy/speed metal album that puts the actual revival of heavy tunes decidedly above the revival of the 80s rocker image and posturing.

Main reason why this is successful where other revivalist heavy metal discs aren't though, as far as I can tell at least, is that these guys draw on more than just Priest, Maiden, and the other NWOBHM bigs, pulling just as much (if not more) from early punk and Motörhead. This is an album to shotgun cheap beers, kick kindergarteners, and trash Holiday Inns to; it's visceral stuff, not the kind of purely nostalgic bullshit that's to be expected from so many young bands now that draw from the Reagan/Thatcher decade?a decade that most of their members weren't born in and, ostensibly, know little-to-nothing about.

Seax sound like they play exactly what they want to play merely for the fact that they want to play it. Whatever emphasis placed on 80s fast-and-cheap aesthetics on this thing is thoroughly overpowered by the fist-to-the-table accentuation of fun in the end. Yeah, the riffing is all very heard-it-before and the lyrics are borderline retarded, but it's all about the "fuck you, I'm drunk" energy here.