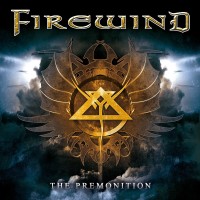 After three solid power metal albums and the fourth, Allegiance, which allowed the Greek guys to vent every hard rock feeling, The Premonition feels like the perfect mix between classic power and the hard rock/heavy metal of the last release. A kick-ass metal cocktail.

To introduce the band, how not to talk about Gus? Gus G, Firewind's acrobatic guitarist, was not a newbie in the metal scene at this point, but finds in this album his real consecration as guitar maestro. He, the only Firewind stable member, shows not just great technique, but also to be damn groovy and fanciful, providing every song's soul with tight, sick riffs and outstanding solos. And how to forget Apollo? Named as the Greek (!) god of medicine, he was really the cure for Firewind to get out from its plain mediocrity (not in a bad way, just because the band brought nothing new) and impose its presence in the crowded metal hive. His rough voice, so far away from the high-pitched tones of classic power metal, sticks in the listener's mind and will not be forgot so easily.

The Premonition is just a breathtaking succession of masterpieces. The ballad, "My Loneliness" could be expected as a truly needed rest from the heaviness of the other tracks - especially being placed after "Remembered", the hardest track of the album, a big blow right in the face - but still surprises being a slow, epic hymn to sorrow and grief, with Apollo's voice really feeling sorry and painful.

The album, from the disruptive opener "Into The Fire" to the imposing ending "Life Foreclosed", doesn't really have a single letdown track. To complete the opus, a great cover from the Flashdance soundtrack, Micheal Sembello's "Maniac", demonstrates the ability to impress its style in a foreign style song without de-naturalizing it. Finding a low point in The Premonition has been quite difficult but, if I have to write one, it's that the style, despite being far from repetitive, doesn't vary so much.

Overall, a really great release, which had not shown the premises of the Greek band's recent decay. Firewind, wake up. You do have the talent to go back to this level.