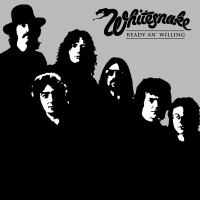 
The Rolling Stones once famously sang "I can't get no satisfaction", but for Whitesnake there is only joyous "sweet satisfaction" to be had with their 1980 song and album of the same name: Ready An' Willing.

Released in 1980, this was the third studio album for British band Whitesnake - a band formed out of the ashes of Deep Purple by Mark III singer David Coverdale. By this stage of their career Whitesnake were pretty big in their homeland, the UK. They even headlined Saturday night at the big Reading Festival that same year. Two singles from Ready an' Willing charted in the UK - "Fool for Your Loving" reached #13 in the mainstream charts and the title track made #43. It was only later in the decade that they re-invented their look, to appeal to glam metal fans, and went on to conquer the huge US market, even re-recording earlier songs.

For Ready An' Willing, Coverdale recruited two previous members of Deep Purple, in Jon Lord on keyboards and Ian Paice on drums. They were joined by Mick Moody and Bernie Marsden on guitars and Neil Murray on bass. With this line-up in place, they created a blues-based rock album which showcases solid song writing and very competent musicianship. David Coverdale has a strong voice, Ian Paice is great on the drums (as always) and the guitar work is very well done. Whilst this is blues-based rock, the lyrical content is classic "cock-rock" - what else would you expect from a band that calls itself Whitesnake? The majority of songs centre on the theme of "loving", which is the traditional rock and roll euphemism for sexual intercourse. Songs like "Fool for Your Loving", "Sweet Talker" and the title track fall into this category. The real highlights, however, are the memorable ballads "Blindman" and "Ain't Gonna Cry No More". The album fades after this, with the closing tracks a tad unoriginal and uninspiring.

In the context of the time of its release, other British bands were exploring new ground that isn't evident here. The New Wave of British Heavy Metal bands (often abbreviated as NWOBHM) were pioneering a heavier and faster form of rock music, with Iron Maiden, Judas Priest and Diamond Head (to name just a few) releasing significant albums at this time. Ready An' Willing was more a continuation of an older style of blues-based rock music. Overall, this is well worth a listen, especially if you want some good-time classic rock to lighten your mood.