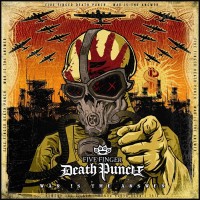 
So, what's for lunch, today? Some angry, tireless, modern metal. Five Finger Death Punch keep on delivering their Pantera-inspired groove metal, eager to confirm that the success brought by The Way Of The Fist didn't come just casually.

An Italian rap song says "il secondo album è sempre il più difficile", that is "the second album is always the harder". And that's not totally wrong, because the second release is burdened by the heritage of the debut and by the sky-high expectations, so that the artists, overwhelmed by responsibilities, often feel oppressed and fail to reach the result achieved with the previous release.

Five Finger Death Punch, in particular, had to accomplish a pretty hard task: convince the demanding and skeptical musical scene not to be the umpteenth meteor come to empty every young metal fan's pockets, but to be a band, in the true sense of the word. To have a soul, to define its own style, and possibly to evolve from their first album.

The band has only partly reached these targets. In fact, if War Is The Answer is surely a solid album, it doesn't give to anyone who already owns The Way Of The Fist a reason to buy this new release. Strengths and weaknesses of the debut album are unchanged: from the super easy yet surprisingly effective riffs to Moody's tough vocals - pretty annoying in the long run, even if in this album his voice sounds slightly better - from the simple and "reassuring" songwriting to every other feature, this album is the same as its predecessor.

Because of the aforesaid reasons, this is an album that, in all its initial awesomeness, doesn't become a reason to consume the replay button. Of this are also guilty the scarcely noticeable variations from one track to the other, despite the offer of a larger range of songs, if compared with The Way Of The Fist. In fact, the only element of musical maturation of the band is the quality of ballads and mid-tempo songs, who shine in the tracklist as much needed rests from this cruel thrash attack.

To a new Five Finger Death Punch fan, I would warmly recommend this album over the debut but, if you already own The Way Of The Fist, don't waste your money - or Mbytes - and time.

Good artists make good music, in their personal style. Legends make great music, evolving themselves, not satisfied with the laurels already obtained. Five Finger Death Punch seem to be convinced in trying the Iron Maiden or AC/DC way, characterized by a stable and easily recognizable style. But it's a shame that their own style is not even half as memorable than that of those two giants.