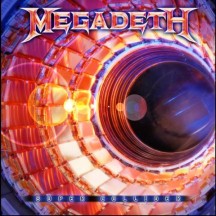 
So MegadavE is back with album 14 now (Jebus, really, that many? I stopped paying attention after The Black Alb?Countdown To Disappointment about 20 years ago!), entitled Supercollider.

It seems across the interw3b there have been a lot of super-deriders, but the band is of significant enough stature that we really should review them and since no one else at Metal Storm Towers was chomping at the bit, I figured I'd take this on as a change of pace from Slavic doom.

Supercollider starts off well enough with "Children of the Grave" errrr "Kingmaker". While it's not the Megadeth I grew up with, it's about on par with what I'd expect from them since the opening strains of "Skin O' My Teeth" off Countdown left me every bit as let down as The Black Album. Upbeat tune, some Satriani-like wah-drenched, two-hand tapped soli? but none of the anger, venom, balls, vigor, aggression, attitude that they once had. You know what made Megadeth well, Megadeth.

The anti-bullying campaign insists "it gets better", but in the case of Supercollider it doesn't.

Sure, there are lots of impressive solo bits to air-guitar along to and the production is a hell of a lot better than, say, World Painted Magnetic, but the tracks themselves just fell largely listless and limp.

Take the e-chugging primary riff off the first half or so of "Dance In the Rain" - it's got some rapid e-string chugging going on, just like my favorite Megadeth riff (the asphalt ripping one off "Good Mourning/Black Friday"), but the song flow around it makes the whole song feel lethargic. At least that song erupts a bit at the end.

Too much of the album just feels like it's trying to walk the line between having some sort of edge, but doing so without sacrificing playability on your average hard/classic rock station.

The album isn't terrible. It's not mortifying horrid, but it's not particularly good either. I mean it's well produced and created by skilled musicians, but it just doesn't have the grit or bite that I was hoping for. I honestly cannot imagine myself intentionally queuing this one again once the review gets posted.

And "Cold Sweat"? suffice it to say somehow Megadeth manage to do pretty much to Thin Lizzy's track what Winger did to Hendrix' "Purple Haze". (Click here if feeling masochistic.) Somehow they managed to suck all the soul and life out of the track. A lot like their "Paranoid", the notes are there, but somehow the "it" that made the original so significant is absent.

But hey, I'm sure a lot of folks will love it. At least it's not Risk, right? Then again, at least there was some risk to Risk...