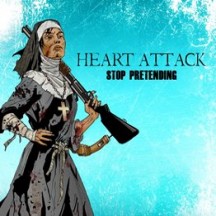 
Releasing a debut album after six years of existence? Makes you wonder if Heart Attack didn't have enough trust in their abilities as songwriters before releasing their material to the masses. They already have one EP (2009 - Lullabies For Living Dead) under their belt, so I have no clue why it took another four years to take the Longplayer leap.

In my opinion it was high noon for the band to "stop pretending" on being just a live act and step up their game; apparently they thought the same and very fittingly named their debut piece Stop Pretending.

Since Heart Attack is operating under the moniker thrash metal I was expecting your typical retro-thrash sound but instead my ears got bombarded with something totally different. I would venture to describe their music more in the realm of groove, progressive with a dose of death metal or just plain and simple - shit, I don't know. Seriously, while I suck at labeling music I would not call Heart Attack a thrash band, but hey, judge for yourself.

They stayed true to their sound throughout most of the album with the exception of "Raging Load". Not taking anything away from it, the song is short, sweet and in many ways a very simple song. Great guitar sweeps, no blast beat drumming and the use of clean vocals makes this one just somehow stand out.

And speaking of vocals; more often than not when a band is employing the concept of incorporating clean as well as harsh, growling vocals the results are somewhat - meh. Not in Heart Attack's case and I think this is one of the many strong points on this album. Also, whoever's idea it was to feature guest vocalists on "Sweet Hunting" as well as "1902" clearly did some forward thinking since those two tracks bring just the right little "something" to the table.

Musically, all the members know how to play their instruments extremely well but the drumming does stand out in my opinion. There are no "filler" moments, no "lets hit the cymbal or snare" just for the heck of it. Don't get me wrong, Christophe Icard still knows how and when to let loose ("Face The Music", "Sweet Hunting"), but he does it subtle and without overpowering any song. Respect, since so many drummers go the "faster is better" route.

The bass guitar is actually pretty high in the mix, surprising in today's production practices and the duo of guitars, courtesy of Christophe Cesari and Kevin Geyer, doesn't just work, it IS the essence of the band. Be it the kick ass solos, the tremolo picking or just the dual assault on your ears, what those two perform on their axes just works perfectly for the band. Maybe for that reason the song "Down The Way" is probably my favorite track on the album, but honestly it is hard to choose which one is the "stand-out" track. All songs do remind me of other bands but without the notion of just ripping them off.

I hear some Gojira, some Lamb Of God, definitely Machine Head, even a bit of Anthrax and believe it or not, Disturbed. In short, if you like any of the above bands, than you will not be disappointed. In short, Heart Attack can clearly "stop pretending" to be just that little band out of Cannes. They delivered a stellar debut album with Stop Pretending and I foresee great things in their future.