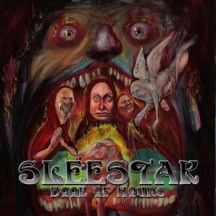 
I first heard Sleestak in 2011 with their stunning sophomore album The Fall Of Altrusia. That record was a singular moment in time, and some of the best psychedelic and atmospheric sludge/stoner/doom metal I've ever heard. Their long songs with slow build-ups were never boring; in fact, I remember several times just listening intently to the music and doing nothing else but being fascinated.

Imagine my joy when I was suddenly in possession of their new release. Though only an EP, here were a handful of new songs to satiate my need for this band. But, what's this? They're all 3-4 minutes long. Does that mean I don't get my intense Sleestak build-ups?

That's exactly what it means. But don't despair yet. Yes, the Book Of Hours EP takes the band in a very different direction than their debut. Gone is some of the sludge and doom, as well as the spooky, epic, build-ups. So, what is left? The blues, baby! And some damn spooky blues at that!

The creepy, spooky clean vocals are still very present, and the vibe has only changed its outer appearance while retaining the dark essence. Instead of long epics and sci-fi/fantasy darkness, we now have occult-based tunes that bring to mind old timey NOLA or a back-alley Memphis speakeasy. The guitars tantalize the ear and the rhythms bewitch the listener in a similar way to the build-ups of the previous record.

At first it was a bit jarring that this EP came from the same band as the last album - but over a short time I came to hear the deep-rooted similarities. As the chasm closed in my mind, I came to identify a true "Sleestak Sound." This really is not only an incredible release, but a testament to the band's extraordinary talent as songwriters and explorers of dark, crushing, metal music.

Listen and buy at Bandcamp.

Written on 30.06.2013 by
Susan
Susan appreciates quality metal regardless of sub-genre. Metal Storm Staff since 2006.