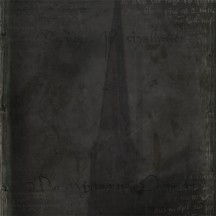 
The cold glimpse of a church. Exactly 20 years after Satan's mysteries were revealed to us, Christ came down and showed us his path. A path which is just as dark and terrifying.

The references to Mayhem's magnificent debut can't be just a coincidence. This is more or less were the similarities stop though. Whether they are real or not, the tales of Reverorum Ib Malacht have always intrigued me. A tale of Satanists who displayed their beliefs through music but suddenly saw God's forgiving light once again. Embracing and expressing it in the only way they know how: through insane sonic rituals. This is akin to what I sometimes imagine when I set foot in an old church and contemplate the vast and imposing architecture.

Their 2005 demo left a mark on me, as I was still very young in my extreme metal journey. I remember how scared and confused I was while listening to the cacophony of riffs and blastbeats juxtaposed with the choirs deep in the background. Years passed by with a couple of ambient-based demos here and there. Finally, in 2011, they released their debut. The old sound was back. I was honestly quite ecstatic about it but, while good, it left me craving for more.

This serves as a proper follower with some twists of its own. A maelstrom of riffs, chaotic drumming and choirs played through an extremely bassy production. Vocals that somewhat resemble Attila's operatic cries appear here and there, hinting even more to the classic black metal debut. The ambient intros and interludes set the mood just right before the madness sets in yet again. Low, deep and unsettling sounds creep their way through while whisperings and prayers are on top.

The songwriting feels more varied than what I remembered from their previous releases, specially the drumming that displays some interesting fillers every now and then. Reverorum Ib Malacht keep the pace of the drums and riffs slower this time around, resulting in more hypnotic tracks. It's a calmer sound than expected but when the fast tempo reappears, it does come back with a vengeance and it's easy to get lost in the storm.

All in all, I'm left satisfied with the result. It's worth commenting that there are apparently two different versions of this album. The other one features two long tracks instead and the music is different as well, which I haven't heard unfortunately. Other than that, there's not much left to say. For those who already know and enjoy this band, this will certainly provide the needed fix. For the uninitiated: if ambient, lo-fi black metal and the occult are up your alley... Let the light come to you and cleanse your soul!