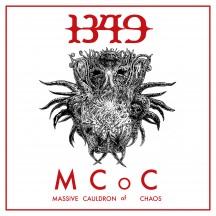 
Four years have passed and 1349 greet us with a new album, entitled Massive Cauldron Of Chaos. Although being a black metaller through and through, 1349 was never my cup of tea. When yearning for some True Norwegian, yet "not-so-special" but more straightforward black metal, I mostly put Ragnarok into my player, which I think to be quite similar to the band discussed today. However, from now on I will have to keep an eye on them, for the new album isn't bad at all.

Massive Cauldron Of Chaos contains eight regular songs with a total playing time of 37 minutes. The second track "Slaves" was also released as a single, plus a video was made to support its distribution. A good choice actually, as it's a nice song evoking visual imaginations. After the first track punches the album's name into the listener's mind, "Slaves" hails with a decent chorus and some catchy riffs. The true highlights nevertheless appear later, as "Postmortem" and "Mengele's" bring in some melodic and atmospheric elements, yet having them stand in the background in order to keep the straightforward approach dominating. The same goes for the last track "Godslayer", which completes the best side of the album. Anyway, there is no real bad track on Massive Cauldron Of Chaos, all of the songs work equally fine, but some are just more equal than others.

However, there is one big drawback that keeps disturbing this image. As much as I respect Frost, especially for his work in early Gorgoroth, so much do I hate his bass drum sound on this album. Why? Because there is no bass in it. It clicks like a metronome, leaving the low frequencies to the bass itself. By the way, the bassist does some great work on all the songs as he has both the job of a bassist and bringing the absent punch of the drums back. After a while this really destroys the mood and I'd rather listen to some punching Taake bass drum for example. On the plus side of the production, the guitars and bass work really fine together in terms of volume ratio, such as when one guitar goes for some melodic riffs, for example. It's not that I'm a fan of good production, in fact I actually stick to the old lo-fi works of the early scene, but if there's something so annoying it's this fucking bass drum, it's not nice any more.

Apart from that, Massive Cauldron Of Chaos is really good. Most probably it won't win the black metal album of the year award, but stays as a brutal and occult variety opposed to some very modern approaches as seen in the recent years. Furthermore, it definitely marks an improvement in 1349's discography, and we shall hope this continues so there will be more positives in their future music for us not-so-humble and critical listeners.