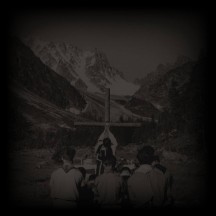 
Rorcal and Process Of Guilt: two bands, full of anguish and grit, each hot on the heels of a well-received testament to the catastrophic potential of black noise. They have come together, grinding like the massive tectonic plates of unnatural noise, to unleash an excellent split EP of dread-filled coldness.

In the red corner, Rorcal leads off with "IX," an uncharacteristically up-tempo whirlwind of shrieks, blastbeats, and tremolo-picked riffs. They have made a startling progression since 2013's Világvége - they now seem to be almost entirely a black metal band. While Process Of Guilt bleeds out from the ground with their deep, earthy drone, Rorcal rains down from icy, frostbitten peaks in a cold wave of despair. Within the enveloping shell of embittered black metal, however, elements of the old Rorcal still remain. The riffs batter and battle furiously with the crustiness of hardcore punk, and the drums splash their crushing weight all across the background with a furious sensibility more akin to grindcore than black metal.

"X" drops off suddenly into the dirge-paced, droning doom that Rorcal was once known for, until "XI" quickly resurrects the pace with another gale-force blackened assault. While this change of pace (both literally and figuratively) might be unwelcome news to some fans, rest assured that these songs are still characteristically Rorcal. "IX," "X," and "XI" are not pure black metal; there remains a distinctly doom-y flavor, as well as the undeniable sound of Rorcal. This movement is not, after all, without precedent; Világvége bore the beginnings of black metal in it.

In the blue corner, Process Of Guilt's half follows logically from 2012's Fæmin, something of a departure from the style of their previous albums, but one that yielded a megalithic graveyard of cold, crushing riffs. Their riffs are repetitive and vast, drilling themselves over and over and over into the listeners' ears as they construct the wall of sound. The deep buzz and bloody death growls provide a flavorful counterpoint to the shrieks and higher-pitched riffs of Rorcal.

"Liar (Mouvement I)" heralds the band's arrival with funereal blasts of howling winds and feedback, soon compounded into an unsettling veil of bitterness with droning guitars and pained growls. After two-and-a-half minutes of unstructured wailing, the rest of the band joins the grim procession and locks into the mechanical two-step. The songs move like hadean assembly lines, trudging ever-onward in their loathsome direness, layering and building up one inch at a time until the mournful melodies are complete.

"Liar (Mouvement III)" fades out much in the same way that "Liar (Mouvement I)" began the journey: the band falls away and leaves only the aimless, forlorn wanderings of groaning guitars. It is a fitting end to the EP: bleak, mournful, and minimal.

It would be too difficult to choose which of the two bands played their part most effectively, but the last thing we want is a lopsided split. As far as individual songs are concerned, Rorcal's "IX" and Process Of Guilt's "Liar (Mouvement I)" stand out the most, but at only 32 minutes long, it is worth listening to the whole thing a few times regardless.