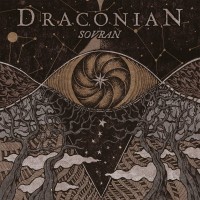 
After four years of waiting, mixed feedback for A Rose For The Apocalypse, and a lot of ups and downs, including the departure of Lisa Johansson, many longtime Draconian fans may not have expected such a truly Draconian-sounding album. But the sad, Swedish metalheads showed in Sovran that they can still be seen as one of the best doom metal bands, and that those four years of waiting have not been in vain.

Although it is this author's personal belief that more than half of the construction of Draconian's works results from the genius of Johan Ericson, who has also left scars on the souls of listeners for years with Doom:VS, without a doubt Heike Langhans surprised me on this album, playing a leading role already in her first serious experience as a lead vocalist with the band. Although lyrics about the meaning of existence reach the ultimate absurdity in their futile human efforts, the existence of unending despair and the words that follow are not new to the doom metal genre; still, an album under this name in this style is undoubtedly a paradox that will leave avid listeners wanting to know if or how Draconian went astray.

The mystery of Sovran starts in "Heavy Lies The Crown." That track is like stepping into the Great Hall of the secrets of the universe, which suddenly makes every listener question everything. In that very first moment, a dark and mysterious effect forces us to face the supernatural, a force originating from confusion and pain. "Heavy Lies The Crown" is a classic in the genre, in the vein of what doom metal itself has long been shouting: the music tells us as meaningfully as words that our demise and the last days are drawing closer than ever.

It must be said that no matter how Sovran proceeds with its significantly progressive, melancholy melodies, it is difficult to remember the past and anticipate the future rhythms. Sovran is such an elaborate tapestry, exploring places that make you wondrous and confused no matter where it goes. Sometimes the melodies resonate with the unbridled euphoria of transient life as it has been, and sometimes with explosive rhythms and bone-shattering riffs of great tragedy that suddenly descend on the listeners ears. The more down-tempo work is reminiscent of Black Sabbath (from whom, of course, everyone active in the scene has borrowed).

This album promises to leave a long-term impact on the genre. In addition to the typical instruments, the cello contributes extensively to the symphony, especially on the third track, and the impressive harmonica playing must be remembered for its crystal-clear sound that challenges the listener with both fear and hope. I want to say that Sovran is a masterpiece, with Heike's voice echoing the howling wind, juxtaposed against Jacobsson's harsh vocal baseline, and a heavy, imposing skeleton that makes Sovran seem the product of great dedication and capable of satisfying Draconian's fans.