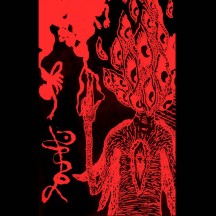 
If you've been napping around so far this year, waiting for a standout black metal release to swing around your way, it's time to wake the fuck up. The beast hath returned.

The journey of Skáphe so far has been comparable to that of a child with Progeria. This band is young, not even 5 years old, but already they have shown signs of immense growth and sound maturation across their three current releases. Originally spawned in 2014 by the talented wizard that is Alexander Poole (also of Chaos Moon and Krieg note), soon the mysterious D.G. of Misþyrming was recruited as well, helping to make an already impressive sound even more dynamic and spine tingling. This new ingredient resulted in the colossal Skáphe² from last year. What next?

Just about a year later, now fans get graced with a new EP from the band, Untitled (let's just call it "That Nameless Bastard," or TNB, to make this more fun). There's only one track here, but Skáphe didn't sell us short, as "VII" is no less than 22 minutes of pure, swirling black metal madness. Essentially picking right up where the previous album left off, here we're treated to an extremely hypnotic and satisfying brand of psychedelically-infused black metal. Not quite the spacey, bouncy variety of bands like Oranssi Pazuzu or Angst Skvadron, but more the "wobbly," chaotic brand explored by those like Arizmenda or Wormlust. Even so, despite the similarity to the latter two, Skáphe remain a tricky, unique monster, one that can easily stand on its own two feet and legitimately say "this is our sound."

The most impressive feature of Skáphe that keeps me coming back, and that is written all over TNB, is just how seriously well their black metal snakes in and out of ferocity and those more relaxed, ethereal moments of psychedelia. Give special attention to the music here from about 2 to 10 minutes in. Hear how it starts building in its chaos towards the 3 1/2 mark, with those blasts and frantic riffs? Then it begins to gradually slow in tempo, becoming more midpaced by 5 minutes, and by 6 minutes, holy shit my friend, you have been thrown headfirst into the Shadow Realm. But don't worry, you won't stay there forever. More bursts of energy are coming. But so is more of the Shadow Realm as well. With Skáphe, this interesting, sophisticated dance between the two is just the name of the game.

If you were still questioning the quality of Skáphe, or to what degree they stand at the forefront of "great" black metal bands at the moment, let those doubts be put to rest now. With TNB they have done it yet again, serving up the third dose in a saga of highly creative, engaging black metal that will hopefully only continue to grow from here. The only complaint with this release is that it's just a single track. But hey, I damn sure know I'd rather be foaming at the mouth for more than screaming for it to stop.

Go get that beauty.

Written on 12.03.2017 by
Apothecary
Comforting the disturbed and disturbing the comfortable since 2013.
More reviews by Apothecary ››