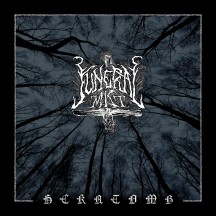 
While 2018's biggest surprise comeback does not have too many surprises within itself, Hekatomb still hits harder than most black metal releases.

To prepare myself for this review, I revisited all the previous material. There isn't really a lot to dive into, but Funeral Mist's music has always spoken to me on a different level. Now I can safely say that this project by Arioch, a.k.a. Mortuus, is without a doubt my favorite within the current Swedish black metal scene. But what is it that captivates these corrupted ears? It's the raw, beautiful melodies that evoke such a blood-chilling atmosphere. The refined, violent, and so-gorgeous-you-can-hum-them riffs from Salvation remain nearly unmatched. And what about Maranatha, with its cleaner sound, daring experimentation, and such an unnerving, disgusting, fanatical vocal delivery? You see, there is plenty to love in Funeral Mist's sound, a sound that it took me an intense week to realize really is their very own.

I'm glad to let you know that Hekatomb sits well with its two predecessors and that what you remember from Funeral Mist's style has not been forgotten. The unusual, intriguing, and unbelievably furious riffs are still there in tracks like "In Nomine Domini" and "Hosanna," the latter a track that could have easily been released back when Salvation first haunted our ears. Arioch still sounds like a possessed, mad prophet ready to puke black blood on all humanity. We have plenty of extreme metal vocalists whose screams and growls we consider iconic and I really think it's about time Arioch's throaty and disgusting tone is appreciated. "Shedding Skin" in particular is quite unnerving thanks to that incredible performance behind the mic. If slower, more contemplative black metal is your thing, then Hekatomb has you covered with the two longest tracks, "Cockatrice" and "Metamorphosis". Here we can hear Funeral Mist's more subtle and experimental side, with haunting keyboards and the choirs that have become a defiant part of the project's ceremonial, biblical tone.

Production-wise, Hekatomb seems more balanced that the previous two albums. Not too raw and lo-fi so that we may fully appreciate the melodies and ideas presented, but not too clean in order to pack a punch. Hekatomb's songwriting is a bit less adventurous than before, but one must take off the nostalgia goggles. Sure, it might not be as savage as Salvation or as extravagant as Maranatha- but one must consider an even more important role: Funeral Mist's third opus solidifies their sound as their very own.

Blessed be the song of the fraud and the sham!
Blessed be the foul masquerade of the lamb!
Hosanna! Behold the rise of an army of well-dressed anti-Christs!