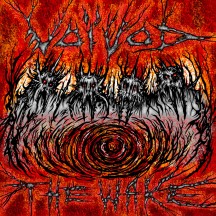 
These days there are only a small handful of older metal bands, say those who have been in the game for well over 20 years, for whom I can still see myself getting reasonably excited about new releases from. You'd better believe Voivod are one of them.

We should all know the story by now. Following the death of founding member and creative mastermind Denis "Piggy" D'Amour, the sci fi thrashers in Voivod decided to press onward rather than split up, a decision that (surprisingly or not) has actually yielded quite impressive results. 2018's The Wake sees the band more or less continuing upon an enjoyable path already established with their previous Target Earth: one that pays homage to the more "classic" Voivod sound of the Dimension Hatröss and Nothingface days while also updating it with more contemporary production techniques and perhaps a bit of a more proggy sound. Fans of Voivod's earlier material would be hard pressed to not find something likeable here, as all the trademark approaches of the band are as on point on The Wake as they ever were: Snake's wailing vocals, Away's excellent drumming, and bouncy, catchy riffs carved out by newcomers Chewy and Rocky, worthy successors to their guitar and bass predecessors in the band.

What perhaps makes The Wake most enjoyable, however, is its wonderful transitioning between the thrashier and the more mellow aspects of Voivod's sound. The band had already done a pretty great job with this on Target Earth, but here the technique feels even more refined and well delivered. Opening track "Obsolete Beings" demonstrates perfectly, being more upbeat and bang-able for the bulk of its duration before descending into that more laid back, spacey feel around the 4 minute mark, a shift that feels completely natural. Sometimes the opposite occurs as well, as on "Spherical Perspective," a track that seems to get more intense and aggressive as it progresses. Truly, Voivod's talent for mood and tempo manipulation is on display here in full force.

The Wake is an album that should definitely put to rest any doubts about Voivod's ability to continue on with quality music post Piggy, if there still were any. Taking this album together with Target Earth, between the two Voivod have not only demonstrated their ability to recapture their roots, but also their ability to almost transcend and reinterpret them as well. This is an album that at times feels like it could have been released in the mid -to-late 80s that were the band's heyday, but that also feels as though it was specifically made for 2018 at well. While the Voivod formula is probably unlikely to deviate or be reinvented very much from here, The Wake simply proves the band's ability to nail what they do best yet again, and certainly makes me excited for whatever subsequent material they may have in store.

Written on 03.10.2018 by
Apothecary
Comforting the disturbed and disturbing the comfortable since 2013.
More reviews by Apothecary ››