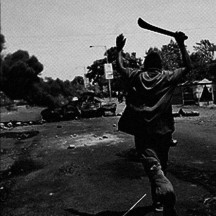 
I bless the rains down in Africa: For they try to cleanse the soil; painted with innocent blood, sweat and tears. For they try to tone down the screams and cries of the dancing machete.

Maurice De Jong, of Gnaw Their Tongues fame, has repeatedly explored and interpreted many of the most dark and extreme aspects of the human existence in several of his projects. While the utter terror of serial killers, religious fanatics and the occult serve as a perfect catalyst for Mories' vast explorations within drone, black or industrial metal… Offerbeest's Afrika offers a different kind of nightmare. A very real and tangible one.

It does so while also shifting focus from the overall black metal aesthetics of his work and focus solely on harsh power electronics. The abstract nature of this release could only be compared to Aderlating's tormented and unstructured hymns of dark chaos. But Afrika is far too physical for the comparison to go any further. Here you feel every beat, every gut-twisting low end and high-pitched scrap of iron. Every blood-thirsty command will persecute you and make you dread the heartless society around you.

The acute turmoil of the Dark Continent is reflected through one of the clearest and most direct productions in Mories' catalogue. The use of only analogue gear and absence of cloudy computer-driven effects pack the extra punch Offerbeest needs to separate itself from the other projects.

Afrika presents us a hostile half an hour of corrosive bass and static. It's short and to the point, which makes the unsettling atmosphere even more addictive and engaging. It lacks climaxes or crescendos, leaving the listener lost in the harrowing uncertainty, which matches the subject matter perfectly. Mories certainly scored a point with this project. I sincerely hope he gives it enough attention to build upon it.

The rains down in Africa muffle the gargling of my slit throat. I bless them dearly.