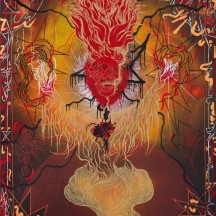 
Five plus years of partnership in crafting swirling black metal madness between Alex Poole and HV Lyngdal has led to this.

While I may be committing the grave Metal Storm sins of fanboying and presenting an opinion in a review as objective fact in saying so, I'm going to be very blunt here. Being that Skáphe and Wormlust are two of the absolute best bands that psychedelic black metal has to offer, the wise among us should have known even before it came out that a full blown collaborative release between them would be pretty spectacular. After over a year of teasing from Poole and Lyngdal's Mystískaos collective, it has finally graced our ears in the form of the 36 minute Kosmískur Hryllingur, and oh, what a deliciously mindbending treat it is. Being a believer that the best collaborative albums are those that fully synthesize both parties into a new entity (such as the Sunn O)))/Boris collab, or the one between The Body and The Haxan Cloak), this album can certainly be said to hit that mark. Here it seems as though the ethereal, swirling ambiance of Wormlust has been cast as something of a hallucinogenic cloak over the body of Skáphe, making the more furious and abrasive approach of the latter a little more hypnotic and restrained while still sounding altogether hellish and disorienting.

Although the dense atmospheres of Wormlust somewhat serve to counter out the Skáphe ferocity here, Kosmískur Hryllingur is still a downright intense listening experience. Occasional breaks from the midtempo approach predominant on the album ascend into more upbeat, blast heavy territory, showing that the aggressive edge to the music, while perhaps not the priority, has still not been abandoned entirely. It's "intense," yes, but more the sort of intensity meant to make shivers run down your spine and get your hair standing on end than the type of intensity that just beats you to a pulp and swallows you whole. Moreover, one of the most enjoyable aspects of the music here is its parallels to the legendary Lurker Of Chalice (indeed a difficult band to take lessons from in black metal), especially with regards to the almost nauseating sense of atmosphere and phenomenal bass work. Apart from being just all around wonderfully well written, if there's one area of this collab most deserving of praise, it's the crisp, all encompassing production, which thankfully leaves nothing to the imagination and allows all layers of the composition to shine to their fullest.

The music on Kosmískur Hryllingur easily sounds like it could be the soundtrack for a mesmerizing ritual in the Icelandic wilderness, one in which the participant ingests heavy amounts of a mind altering substance and slowly morphs from human to beast in the ensuing trip. The music is thus transformative, not merely for the bands involved crafting something greater than their individual selves with it, but also for the listener, as the experience truly leaves an impression of "I've never heard something quite like this before" after the fact. Arriving at exactly the right time, wonderfully mastered, and impressive in all of its dark, resplendent beauty, yours truly believes this collaboration to be the black metal album to beat for 2019.

Written on 23.06.2019 by
Apothecary
Comforting the disturbed and disturbing the comfortable since 2013.
More reviews by Apothecary ››