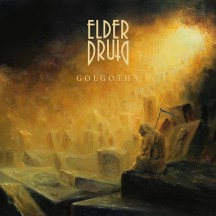 
The first vocal line of an album can often be something of a 'make or break' moment when it comes to discovering new artists, and here it's very much a case of the former.

Barely thirty seconds into "Sleeping Giant", the opening track of British sludge/stoner doom act Elder Druid's sophomore album Golgotha, and the listener is greeted with the most emphatic roar, a thunderous boom that feels as if it's echoing through the ominous stone ruins on the album cover. Combined with a dirty, fuzzy guitar tone and slow, gnarly riffs, and Elder Druid make it clear right out of the gate what they're all about.

The influence of bands such as Electric Wizard, Sleep (particularly Holy Mountain) and High On Fire is felt keenly early on; however, the approach here, exemplified by the title track, is a bit more "in your face" than those acts, the bludgeoning riffs almost suffocating the listener at times with their relentlessness. Golgotha is one of those albums that occupies the space in which stoner, sludge and doom metal overlap in terms of pace, tone and groove, and nestles itself comfortably within that Venn diagram intersection. Similar to Hollow Leg's Civilizations from 2019, there's not much appetite on display here for mixing things up. On the flip side, there's something to be said about doing one thing very well rather than several things quite well, and with 7 songs coming in at around 40 minutes, Elder Druid manage to avoid staleness creeping in too much before the end of the record.

There is the odd moment of variety on Golgotha to keep things interesting. "Dreadnought" features a tasty, stripped-down bass-driven bridge that eventually leads into one of the satisfying grooves on the album. Additionally, the muted, freeform opening of "Paegan Dawn Of Anubis" offers some brief respite from the barrage of riffs. However, that's pretty much it. There's some mild fluctuation in pace throughout the albums, but nothing that approaches what would generally be considered to be "fast". Ultimately, it will be clear within a minute or two of listening whether Golgotha is something that appeals to you; if you've reached the end of "Sleeping Giant" and aren't convinced, you might as well turn it off there and then. However, if you're down for huge, murky riffs, plodding grooves and volcanic barks, Elder Druid have all of that in spades.

Written on 26.01.2020 by
musclassia
Hey chief let's talk why not
More reviews by musclassia ››