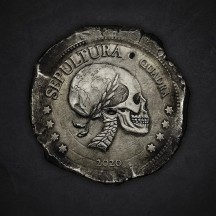 
Have you realized that Derrick Green has been a member of Sepultura twice as long as Max? I know, it's preposterous.

Fact #1: Sepultura's trilogy from Schizophrenia up to Arise is historical proof of how majestic thrash metal can be. Nothing released from this band after 1991 ever came close to this level of greatness and nothing ever will in the future.
Fact #2: The band's releases after Chaos A.D. and up to Machine Messiah ranged from 'not good' to 'what-the-fuck-is-this-shit' and most of them were so horrendous that it amazes me that Sepultura still exist as a band and people are still somehow interested in what they put out.
Fact #3: Eloy Casagrande is a drum prodigy and the absolute best thing that has happened to them during their post-Cavalera years, and since his recruitment they have been making some very unexpected progress.
Fact #4: Machine Messiah was the first listenable - and even fine - album (from start to finish) by Sepultura after Chaos A.D.
Fact #5: The two tracks revealed before the release of Quadra, "Isolation" and "Last Time", left a lot to hope for.
Fact #6: If you expected a 180° turn towards Beneath The Remains or Arise, because of these two tracks, hold your horses.

As its name suggests, Quadra is roughly divided in four parts, where each part features three songs. The first part is the more aggressive and thrashy side of the band, and it sounds fucking awesome. Yeah, that simple. Especially the main riff of "Isolation" is proof of how influential the song "Arise" has been for thrash; hundreds of bands have tried to craft something equally jaw-dropping, and Sepultura come very close with this song. The second triptych of the album then incorporates a more rhythmic, groovy, and Roots-styled approach, while the third part is more experimental and progressive with "Guardians Of Earth" being an absolute delight. Finally, the closing tracks are more melodic and 'soft', with acoustic guitars, female vocals, and oriental and symphonic passages. All the aforementioned elements blend well within the songs themselves so that there isn't so much of an impression that we are merely being offered four different EPs packaged as one LP.

The performances are generally very good, even Green is not annoying for the second album in a row, and Jens Bogren's production is just flawless. But credit must be given where credit is due. The guitar work is tremendous but it is Eloy Casagrande who has steered the whole Sepultura ship to the right direction; before him the band had hit the iceberg, now they are sailing back to glory after so many years. Whatever style he plays, be it groovy, thrashy, jazzy, funky, heavy, proggy, he does it with such power, passion and precision that Quadra is worth your time and money just to admire his skills. I think he motivates everyone in the band to become better and he is the perfect combination of the bestial insanity of early thrash and the complex technique and innovation of prog.

Quadra is a very enjoyable metal album. It mixes raw thrash with tribal percussion, orchestral elements, choirs, progressive parts, emotive melodies, and clean vocals in a way that feels cohesive and unique at the same time. Andreas Kisser says that "There is no reason to put out an album unless you've got something new to tell. A lot of bands out there are slaves of themselves, trying to repeat their formula. That's stupid! You have to respect the past but you are here now. So... do something different!" I don't particularly agree with him. To me, if you are a musician your first concern must be that your music is good and if you manage to offer something new as well, that's a very welcome little extra. Sepultura can definitely not be accused of offering the same microwave-reheated dish with every album to their fans, but they have been rightfully bashed for putting out some really bad music. With Machine Messiah and now with Quadra they have managed to innovate and write good songs at the same time. This is a win-win situation for them and their fans.