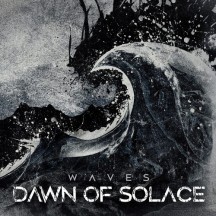 
Tuomas Saukkonen shocked the world seven years ago when he disbanded all of his projects to focus solely on Wolfheart. But somehow we now have a new Dawn Of Solace, so that was a fucking lie.

Maybe not really a lie since Dawn Of Solace was always more of a side-project than a proper band like Before The Dawn was, plus he never really promised never to return to his previous ones. Regardless, this is Tuomas' first non-Wolfheart in a long while so maybe there's more to come. What is certain is that this is music that wouldn't have fit under the Wolfheart, also because most if not all of the vocals are handled by someone else other than Tuomas, as was the case on the project's debut, The Darkness. This time, the vocals are handled by Mikko Heikkilä, who previously collaborated with Tuomas in Black Sun Aeon. Eikind, the vocalist on The Darkness also has a small vocal role on the album, but just as with Tuomas' harsh vocals, everything is pushed back by Mikko's cleans.

This essentially feels like a definitively Finnish melodeath album, but with a lot more gothic doom injected in it (or what we used to call Suomi metal here), and with the entire death part smuggled out. It feels gloomy, morose and dreary, but with some of the grandiose feeling of an Insomnium track played at an even slower pace, and with the slightly-progressive clean-vocal-led melancholy of a modern Katatonia track. At just forty minutes in runtime, Waves manages to pack in everything that Tuomas' music is known for: gloomy vocals, solos and very melodic death doom, this time with just a lot more emphasis on the melody and the gloom. The short runtime guarantees that there is no moment wasted here, no song feels longer than it should be, and the album as a whole feels like it has much more impact in addition to being very memorable.

This might not be anything really new for Tuomas, the man already covered the whole of Finnish ache with his music, and Waves breaks no new ground that wasn't already broken by the previous album or by any of his other projects, but regardless it's still great to hear some lighter music to contrast the now almost monotonous Wolfheart from a man that has shown at least a bit more range that was his main band now has. Even so, Waves is extremely tight, memorable and well-performed. Not to mention a lot more emotionally resonant, and with an instrumentation (all of courtesy of Tuomas) that never stops building exciting ways to emphasize the feelings. If there is one gripe I do have with it, is that some of the transitions in between songs could've been worked out a bit better, and maybe adding a few more minutes to the runtime would've given the album more breathing room.

As it is, this album should serve as proof of why Finnish metal is as popular as it is, there's just nothing that can really compare to the gloom they manage to ooze from their music, and when it's as tightly performed and produces as this here, we should enjoy it while it's still here.

Written on 13.02.2020 by
RaduP
Doesn't matter that much to me if you agree with me, as long as you checked the album out.
More reviews by RaduP ››