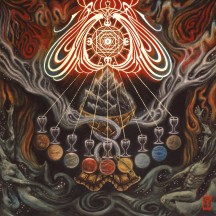 
Is it a split? Is it a compilation? Yes!

Generally, there are two types of collaborative records. Well, three if you count the VAs, where a bunch of artists all contribute one song, sometimes all of them covering the same artist. But nevermind, for the purpose of this review, we'll only consider the other two. First there is the collaborative record proper, in which the entire album is written and performed by members of both bands together. And then there's the split, where each artist contributes with one of more songs individually (and my favorite type is the one where they cover each other's songs). Well, lately I've seen a couple more records that walk the line between these two songs. Wanderers: Astrology Of The Nine has both individual Spectral Lore and Mare Cognitum songs, and songs where the two collaborate. Needless to say, our cataloging-obsessed website has a hard time deciding how to properly catalog this album in our database.

Only two of the songs are collaborations, so a bigger chunk of it is a split, but we add splits as EPs, and it feels damn wrong to call an almost-two-hour-long album a split. If only we had a precedent for it. Except we totally do. It seems that this album (or rather this exact situation) has happened again. Seven years ago, these exact two bands, also released Sol, an album similar to Wanderers: Astrology Of The Nine albeit with half the runtime and only three tracks, in which each of the bands had an individual track and there was also one collaborative track. And despite that being an hour in runtime, we call it a split EP. Maybe in the future we will have some changes in regards to how we catalog collaborations and splits, so who knows how this will be cataloged at the time of you reading this review. Bold of me to assume people will read this, right?

Fucking hell, I spent 300 words just explaining our split/collab dilemma and 0 words talking about the actual music. And there's two hours of it. Well, it's Spectral Lore and Mare Cognitum. It's black metal that sounds like space, what else do you want me to say?

Okay, okay, but only because you asked me nicely. Wanderers: Astrology Of The Nine is probably the best solar system-themed music since Gustav Holst unleashed The Planets, Op. 32 (if you haven't listened to that yet, what the hell are you doing with your life, it's one of the best pieces of 21st century orchestral music). What Wanderers: Astrology Of The Nine has that The Planets, Op. 32 doesn't is (besides adding Earth and Pluto, and almost ordering the songs/suites by their distance from the sun) mountains of blast beats, tremolo pickings and shrieks that feel as cold as the heat-less space between these planets. I mean, one approach would've been to make the black metal colder as further away from the sun we got, but that's none of my business.

Those who have been reading my reviews regularly (all two of you) will notice that I'm often quite critical of albums that are longer than they need to be. It should be expected I'd get my boredom meter up considering we have two full hours of atmospheric black metal, but surprisingly I did listen to this album quite often for its length. I admittedly often pair it with reading, to which its long runtime is actually a benefit, since I don't let my lazy ass put the book down until the music stops, but also because the music is fairly immersive and it never feels like it drags on as much as it could for... you know... two damn hours. Spectral Lore and Mare Cognitum (who I must ashamedly admit I mistook for Midnight Odyssey on more than one occasion) are among the very few one man black metal bands who can actually make really long songs work. And for songs that long, you'd expect a huge deal of emphasis would just be in creating and maintaining an atmosphere, but both bands don't really overstretch their songs that way too much, and there are actually plenty of melodies, pace changes and drone injections, depending on the band performing. If you're gonna make a long album, go big or go home. I'd rather boast about a two-hour long album, than have 15 minutes of my time spent on filler back, which is thankfully about as much as I'd get close to considering cutting from this.

Both bands are fairly similar in sound, but with more listens, the bits and pieces of their different approaches become a bit more clear, Spectral Lore being the more focused on drone and melody, and Mare Cognitum on bigger riffs. And whenever I keep that in mind, I find plenty of occasions where it feels like the actual opposite due to how great they both are at what they do and how versatile they are. When they do collaborate, on that last two tracks, ironically both of them dedicated to the only planet that isn't actually a planet, their approaches blend so well that they almost overshadow the hour and a half that came before it.

Obviously, it is not without its flaws. For one, they switched Venus and Mars for some reason. And they also didn't even mention Ziggy Stardust when talking about Mars. Wack.

Written on 18.04.2020 by
RaduP
Doesn't matter that much to me if you agree with me, as long as you checked the album out.
More reviews by RaduP ››