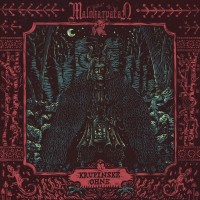 
Sure, the Czechs have Master's Hammer. But the Slovaks have Malokarpatan.

One look at their cover arts is enough to realize that this is its own brand of dark music, one that is very folk inspired. Not the mead-drinking folk, but rather the folk horror of witches, strigois, and boogeymen. Just look at that spooky humanoid being in the cover and tell me he doesn't make you the least bit uncomfortable, like he's the sort of thing your grandma would tell you that would eat you if you didn't behave. This album in particular is based on some pretty nasty history. So this album evokes a pretty dark and olden atmosphere, making it almost indistinguishable from something released in the late 80s. Well, almost indistinguishable.

Krupinské Ohne's use of keyboards and folk instruments seems a bit ahead of the olden sounds they emulate. But those are used sparingly, albeit to great effect. The bulk of the album is still fairly close to heavy metal and early black metal, more melodic than Krolok and more conventional than Remmirath, two bands who share a fair deal of members with Malokarpatan and that you should check out if you want something either harsher or weirder. Krupinské Ohne takes bits of both to create a somewhat oddball take, having just five really long tracks that really don't feel like five long tracks, due to how damn great those riffs are, how seamless the transitions are, and how weird the keyboards, folk instruments and sound clips are.

Feeling so very retro, but doing just enough right to be original is a winning formula that makes Krupinské Ohne really great. But I still wish they went a bit deeper into those oddball parts of their sound. Like they did with Remmirath. Please make another Remmirath album soon.

Written on 25.04.2020 by
RaduP
Doesn't matter that much to me if you agree with me, as long as you checked the album out.
More reviews by RaduP ››